European team of Aerosol researchers with participation of TROPOS awarded

Amsterdam. The Hagen-Smith Prize of Aerosol research goes 2014 to an international team with participation of TROPOS researchers for a summary paper about chemical characteristics of particulate matters in Europe. The team has been analysing data of 24 sites across the continent. One of these is the TROPOS research site in Melpitz near Leipzig. During the last 10 years these paper was cited around 400 times.

The "Haagen-Smit Award/Prize", first launched in year 2001, is designed to recognize outstanding papers published in Atmospheric Environment. The prize has been named in honor of Prof. Arie Jan Haagen-Smit, a pioneer in the field of air pollution and one of the first editors of the International Journal of Air Pollution, a predecessor to Atmospheric Environment. The goal of this prize is to showcase the excellent science that has been published in this distinguished journal and to further attract outstanding future research.

The selection has been made by an international committee of eminent scientists from six countries. „Your contributions are truly seminal and have been recognized as such by your peers.  The high quality of science represented by these publications is what makes Atmospheric Environment a premier journal in the field. Once again, we congratulate you and look forward to your continued and fruitful association with the journal“, said editor-in-chief Dr Hanwant Singh of NASA Ames Research Center. „We are really happy about this award because it appreciate our intensive international cooperation“, said Prof Alfred Wiedensohler of TROPOS, who initialise 2004 this paper. Since 2012 he is one of the three editors-in-chief of the journal but was not involved in the jury and surprised by the award.

Melpitz was one of the 24 sites in Europe, where the researchers were evaluating the chemical properties of the fine dust of the orders of magnitude less than 2.5 microns (PM2.5) and less than 10 micrometers (PM10). The TROPOS research station is located in the Saxon lowlands near Torgau on the Elbe river and is now an internationally recognized regional background station. Since 2013 Melpitz is officially part of the Global Earth Observation System of the World Meteorological Organization WMO. In Germany, there are only three of these regional stations of the Global Atmospheric Watch (GAW). With the official start as a regional station, WMO had assessed the long-term work of the TROPOS for the Study of particulate matter and trace gases. In collaboration with the Environmental Protection Agency (UBA), the station is also integrated into the European EMEP program to monitor the remote transport of air pollutants. It is also part of the European scientific infrastructure network ACTRIS and the German ultrafine aerosol monitoring network GUAN. “The research station Melpitz is representative for air pollution in Central Europe. Our station is also representative of a large part of the Saxon lowlands and beyond for East Germany, "says station manager Dr. Gerald Spindler of the TROPOS about the importance of measurements. The researchers want there to complement ground-based in situ measurements in the future by remote sensing methods. 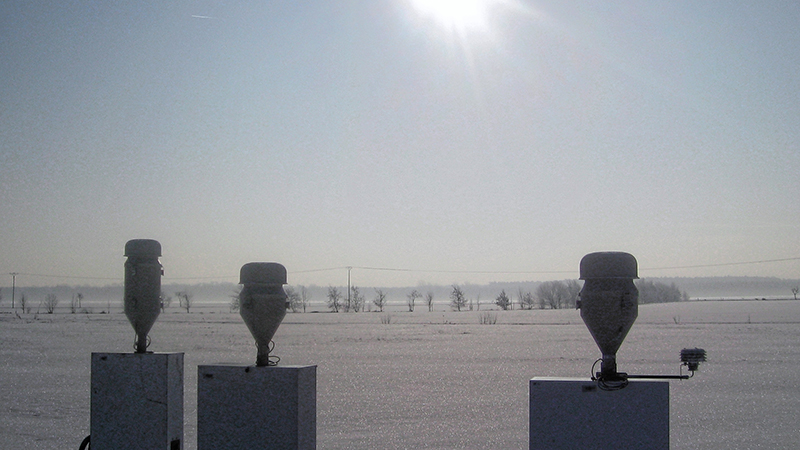