The year 1990 marked the end of the scientific landscape in Leipzig but also a new beginning. The unification agreement provided  the so called “completion” of all research institutes of the former Academy of Sciences of the GDR before the end of 1991. 1,500 employees of various insitutes worked on the site of today's  Wissenschaftspark Permoser Straße (science parks Permoser road) - including about 85 employees of the Research Center for Chemical Toxicology, which focused on environmental research since the 1970s.

After a period of renewal and considerations to integrate the institute to the newly established UFZ or to operate it as a branch of the Fraunhofer Institute, the Institute for Tropospheric Research was formed by the Federal and State Ministries of Science upon recommendation of the Scientific Council  on 1 January 1992.

When the Institute began its work in early 1992, the number of employees was approximately 30. Only the Chemistry Department was fully operational and mainly occupied with the research project SANA (renovation of the atmosphere above the new german federal states). Thanks to the efforts of founding director Prof. Peter Warneck, who established the Institute together with his deputy Prof. Dr. Eberhard Renner the institute could evolve. The number of employees has more than doubled from 52 at the beginning to 170. The budget even has triplet (from 9 million DM in 1993 to 13 Million € today). In the 1990s, the heavily polluted atmosphere over the industrial region Chemiedreieck Leuna-BunaBitterfeld" of the former GDR was the focus of research due to the area`s huge environmetal problems.

With decreasing air pollution the work became increasingly international in the following years. Within the last two decades, TROPOS has developed a profile that meets the characteristics of the Leibniz Association: Social relevance, scientific excellence, application-oriented basic research and cooperation with universities. TROPOS is contact for politics, society and science in the impact-fields health and climate. 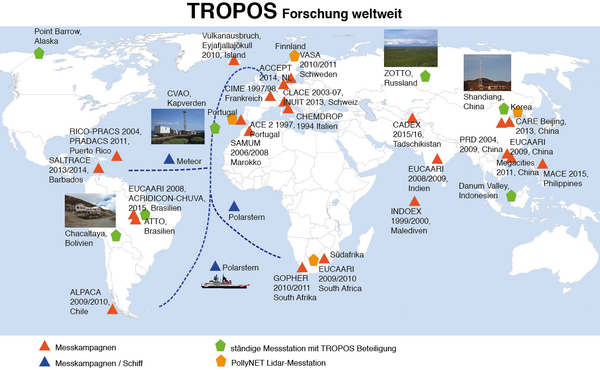