Leipzig/Copenhagen/Pasadena. An international research team has now succeeded in detecting hydrotrioxides (ROOOH) for the first time under atmospheric conditions. Until now, there was only speculation that these organic compounds with the unusual OOOH group exist. In laboratory experiments, their formation during the oxidation of important hydrocarbons, such as isoprene and a-pinene, have been clearly demonstrated. By means of quantum chemical calculations and model calculations, important data on this new class of substances have been estimated. About 10 million metric tonnes per year of them are formed in the Earth's atmosphere through isoprene oxidation. The lifetime of ROOOHs is estimated to be minutes to hours. Hydrotrioxides represent a hitherto unnoticed class of substances in the atmosphere, the effects of which on health and the environment need to be investigated, write the researchers led by the Leibniz Institute for Tropospheric Research (TROPOS) in the current issue of the renowned scientific journal SCIENCE.

The lower layer of our earth's atmosphere is a large chemical reactor in which several 100 million metric tonnes of hydrocarbons are converted each year, which ultimately leads to the formation of carbon dioxide and water. These hydrocarbons are emitted by forests or anthropogenic sources. A wide variety of oxidation processes occur, only some of which are well understood. One recent focus of atmospheric research is on hydrotrioxides (ROOOH). These are gaseous substances with a group consisting of three consecutive oxygen atoms "O" and a hydrogen atom "H", which is bonded to an organic rest (R). Hydroperoxides (ROOH) with two oxygen atoms have long been known and proven. In the literature, it has previously been speculated that there could be substances in the atmosphere carrying not only two oxygen atoms (ROOH) but also three oxygen atoms (ROOOH). In organic synthesis, hydrotrioxides are used to form special oxidation products in the reaction with alkenes. However, these reactive and thermally unstable hydrotrioxides are produced there in organic solvents at very low temperatures around -80°C and further react. Whether this substance class also exists as a gas in the atmosphere at significantly higher temperatures was unknown until now.

In their study, researchers from the Leibniz Institute for Tropospheric Research (TROPOS), the University of Copenhagen and the California Institute of Technology (Caltech) have now been able to provide direct evidence for the first time that the formation of hydrotrioxides also takes place under atmospheric conditions from the reaction of peroxy radicals (RO2) with hydroxyl radicals (OH). The laboratory investigations were mainly performed at TROPOS in Leipzig in a free-jet flow tube at room temperature and a pressure of 1 bar air - combined with the use of very sensitive mass spectrometers. Additional experimental information, especially on the stability of the hydrotrioxides, was provided by the investigations at Caltech. Quantum chemical calculations were performed by the University of Copenhagen to describe the reaction mechanisms as well as the temperature- and photostability of hydrotrioxides. Global simulations from TROPOS with the chemistry-climate model ECHAM-HAMMOZ enabled an initial assessment of the effects on the Earth's atmosphere.

"It is really exciting to show the existence of a universal new class of compounds formed from atmospherically prevalent precursors (RO2 and OH radicals)," reports Prof. Henrik G. Kjærgaard from the University of Copenhagen. "It is very surprising that these interesting molecules are so stable with such a high oxygen content. Further research is needed to determine the role of hydrotrioxides for health and the environment," emphasises Dr. Torsten Berndt from TROPOS. "Our study has shown that direct observation of hydrotrioxides using mass spectrometry is feasible. This means that it is now possible to further investigate these compounds in different systems including, perhaps, the quantification of their abundance in the environment." explains Prof. Paul O. Wennberg from Caltech.

The significance of the first successful detection of this new substance class "hydrotrioxides" will only become clear in the next few years. However, with the experimental proof and the current knowledge, the research study by Berndt et al. has laid first groundwork that should also awake the interest of other research groups. Tilo Arnhold

First intermediate products of the reactions from the "detergent of the atmosphere" directly detectable (Press release in German, 15 May 2019):
https://www.tropos.de/aktuelles/pressemitteilungen/details/erste-zwischenprodukte-der-reaktionen-vom-waschmittel-der-atmosphaere

The Leibniz Institute for Tropospheric Research (TROPOS) is a member of the Leibniz Association, which connects 97 independent research institutions that range in focus from the natural, engineering and environmental sciences via economics, spatial and social sciences to the humanities. Leibniz Institutes address issues of social, economic and ecological relevance. They conduct knowledge-driven and applied basic research, maintain scientific infrastructure and provide research-based services.
The Leibniz Association identifies focus areas for knowledge transfer to policy-makers, academia, business and the public. Leibniz institutions collaborate intensively with universities – in the form of “Leibniz ScienceCampi” (thematic partnerships between university and non-university research institutes), for example – as well as with industry and other partners at home and abroad.
They are subject to an independent evaluation procedure that is unparalleled in its transparency. Due to the importance of the institutions for the country as a whole, they are funded jointly by the Federation and the Länder, employing some 20,500 individuals, including 11,500 researchers.
The entire budget of all the institutes is approximately 2 billion euros. They are financed jointly by the Federal Government and the Länder. The basic funding of the Leibniz Institute for Tropospheric Research (TROPOS) is therefore financed by the Federal Ministry of Education and Research (BMBF) and the Saxon State Ministry of Science and the Arts (SMWK). The Institute is co-financed with tax revenues on the basis of the budget approved by the Saxon State Parliament.
https://www.leibniz-gemeinschaft.de/en/home/
https://www.bmbf.de/en/index.html
https://www.smwk.sachsen.de/ 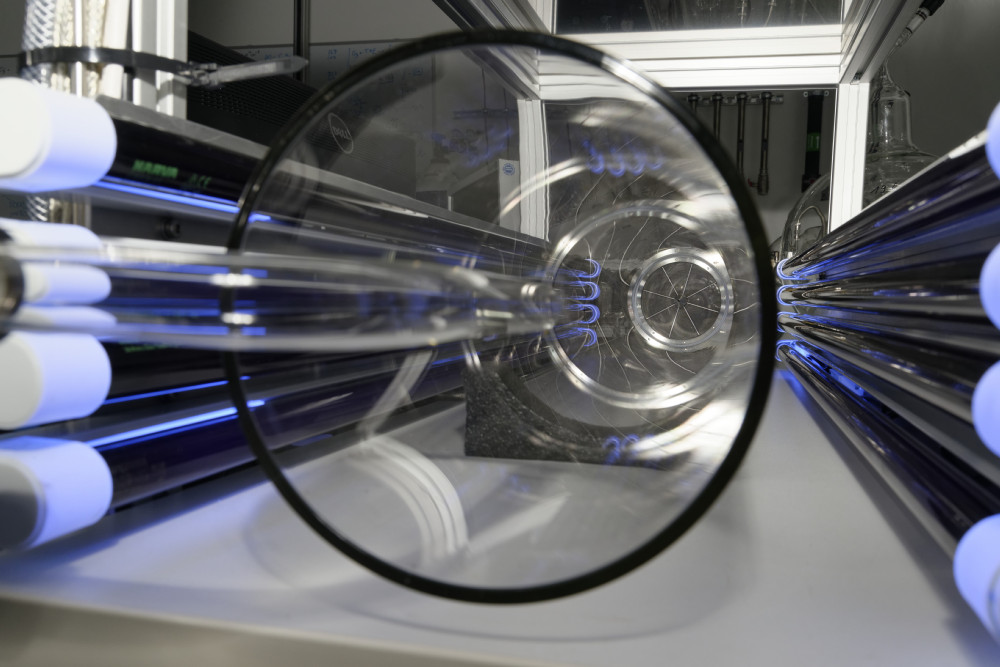 Laboratory set-up of the free-jet flow experiment at TROPOS in Leipzig, with that direct evidence was provided for the first time that the formation of hydrotrioxides (ROOOH) also takes place under atmospheric conditions from the reaction of peroxy radicals (RO2) with hydroxyl radicals (OH). Photo: Tilo Arnhold, TROPOS 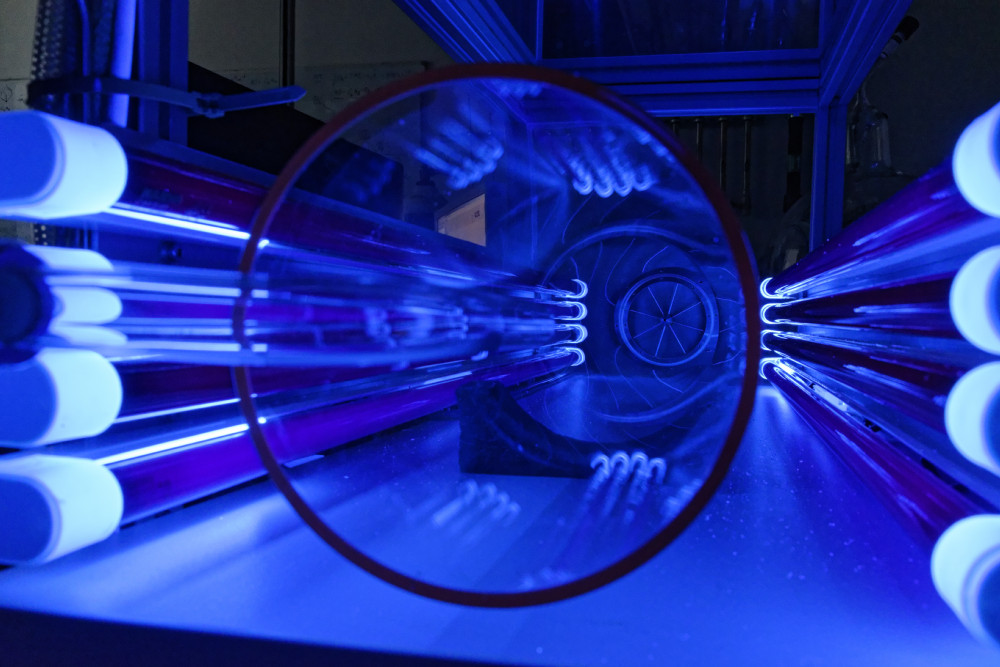 Until now, there was only speculation about hydrotrioxides (ROOOH), that these organic compounds with the unusual OOOH group would exist. In laboratory experiments at TROPOS in Leipzig, their formation during the oxidation of important hydrocarbons, such as isoprene and alpha-pinene, could be clearly demonstrated now. Photo: Tilo Arnhold, TROPOS