What is the largest "dust supplier" on Earth?

Mineral dust in the air is a well-known phenomenon over the deserts of subtropics such as the Sahara or the Arabian Desert and the continental dry regions such as the Midwest, the Prairie in North America or the Caucasian Steppe in West Asia and the Gobi Desert in Central Asia. But even in our latitudes, ploughed arable land or dried up river beds can act as sources of dust at certain times.

How does dust get into air?

Dry and unvegetated surfaces in which a fine and loose soil crumb covers the Earth are suitable sources of dust. From wind speeds of about 7-10 m/s, the soil particles are moved by the wind and finally enter the air. The amount and size of particles entering the air depends on the wind speed but also on the type of soil. Depending on the mineral content of the soil, the individual particles adhere to each other more or less strongly and can thus be whirled up more easily or less easily.

Where does the dust blow?

Dust particles entering the air are transported away from the dust source by the wind. Depending on the prevailing wind, the dust reaches high altitudes and is absorbed by the air currents there and transported over long distances. On this "transport highway", the dust then reaches Europe from the Sahara, for example, or across the Atlantic to the Caribbean or the Amazon rainforest.

Its place in our environment

Although they  are small in themselves,  dust particles  with a  total mass of 1500 megatons  can enter the atmosphere throughout the year. The main source is the Sahara, which produces about 1000 megatons of dust. The residence time of dust in the air varies and depends on regional weather conditions and particle size. Large particles have a shorter residence time than small ones and therefore lighter particles can quickly reach high altitudes in updrafts. On average, dust particles remain in the atmosphere for 1-2 weeks and disperse with the wind. Dust particles suspended in the air reflect sunlight and dim the sun's rays arriving at the ground. For example, on days with a high concentration of dust particles in the atmosphere, solar power plants generate slightly less energy due to the reduced solar radiation. Due to their crystal-like structure, dust particles are suitable as germs for cloud particles and influence cloud formation and ice formation in clouds. Where dust falls on the ground, it is deposited as a thin, in Europe mostly reddish, layer and covers car windows or snowfields. When the dust cloud as a front moves close to the ground, the reduced visibility leads to  impairments of traffic and even accidents, as in fog conditions. Mineral dust  serves as a transport medium for micronutrients that fertilize ocean and terrestrial ecosystems. In addition to the flora and fauna in the Atlantic, the rainforest also benefits from the nutrients blown in by the wind. 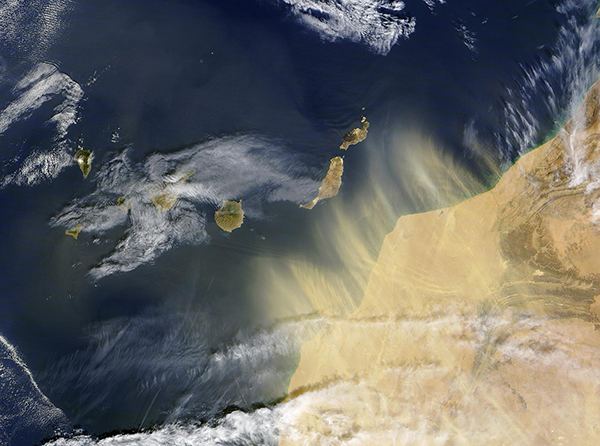 Desert dust blown out of North Africa onto the Atlantic Towards the Canary Islands. Observed by MODIS on NASA's Terra satellite on February 17, 2004. Credit: NASA 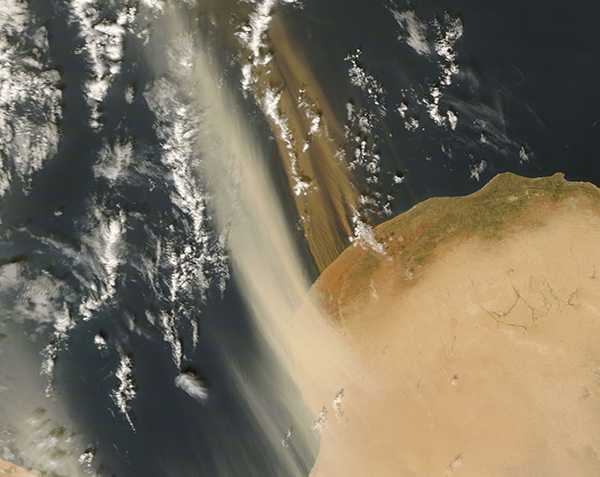 Two-coloured dust cloud off the coast of Libya taken by Terra MODIS on 26 October 2007. The different colors of the dust clouds are due to the different soil types in the source area. Source: NASA 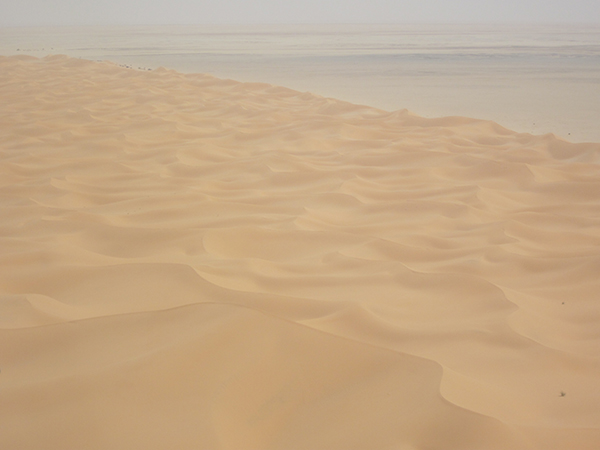 Dune field in North Mauritania, taken during a research flight with the British FAAM BAe146 research aircraft on 9 April 2011 during the Fennec campaign, Source: Kerstin Schepanski/TROPOS

"Why desert sand from the Sahara makes it rain here"