Leipzig: In clouds of the northern hemisphere ice is formed at much higher temperatures than in southern-hemispheric clouds. This conclusion was drawn based on laser-aided measurements at Leibniz Institute for Tropospheric Research (IfT) in Leipzig, Germany, at Magellan University in Punta Arenas, Chile, at Stellenbosch University in South Africa and during transatlantic cruises of the German research vessel Polarstern. In a recent publication in the scientific journal Geophysical Research Letters the authors state that their study documents the relevance of aerosol particles for the formation of ice crystals in shallow cloud layers in the northern hemisphere. The strong air pollution in the northern hemisphere is suspected to contribute to the observed effect. Also volcanic ash particles have a strong influence on the ice formation in clouds. This finding was revealed in a second, collaborative study of IfT Leipzig and Ludwig-Maximiliams University Munich, which used data from the eruption of the Eyjafjallajökull volcano in Iceland in April 2010 and was recently published in the scientific journal Journal of Geophysical Research.

To investigate the differences between the northern and southern hemisphere, scientists at IfT Leipzig analyzed data from the cruises of the Polarstern to Antarctica and back in 2009 and 2010 and compared the findings with an already existing data set from Leipzig. During the cruises to Punta Arenas in Chile and Kapstadt in South Africa they observed the formation of clouds with laser. For that purpose a so-called LIDAR system developed at IfT emits laser pulses at wavelengths of 355, 532, and 1064 nm which are than reflected back to the LIDAR by particles suspended in atmosphere. From the rotation of the oscillation direction of the reflected light, so-called depolarization, the phase state of the clouds can be determined. The comparison of the collected data with the data set of Leipzig revealed strong contrasts in the amount of ice-containing clouds.

Above central Europe 70 percent of all clouds contain ice already at temperatures of above -18 degree Celsius. At these temperatures clouds above southern Chile and South Africa form ice only in 20 and 35 percent of the cases, respectively. The reason for such a contrast is most likely the larger amount and larger variety of aerosol particles, so-called ice nuclei, in the northern hemisphere which are a basic requirement for the freezing of cloud droplets at temperatures between -40 and 0 degree Celsius. These ice nuclei typically consist of mineral dust, soot, or fine ash originating from the numerous deserts or areas with forest fires, but also man-made air pollution from industry and biomass burning activity are a possible source of ice nuclei. “Compared to the polluted atmosphere in the northern hemisphere the air above Punta Arenas in the vicinity of Antarctica is virtually clean. The largest city at the southern tip of America is located right within the Antarctic deep-pressure belt. During most of the time of the year, the air comes from the west – right from the Pacific Ocean”, explains Thomas Kanitz PhD, student at IfT.

It is well known that small aerosol particles are needed as nuclei for cloud droplet condensation and ice crystal formation. Pure, particle-free cloud droplets would not freeze before temperatures decrease to below -40 degree Celsius. This threshold temperature can be significantly increased via contact of the cloud droplet with insoluble particles or specific types of bacteria. However, it remains unclear to which extent ice formation is influenced by these particles or by other meteorological processes, and whether global climate models are capable of reproducing this effect. Related to this point is the question, whether the formation of clouds and thus precipitation in regions with strong pollution differs from the situation in less-polluted regions. In the midlatitudes of the northern hemisphere the free troposphere between 2 and 12 kilometer height is strongly loaded with aerosol particles stemming from man-made air pollution, desert dust and biomass burning. In the southern midlatitudes these particles are mostly absent because the surface area is dominated by oceans and comparably few regions with industry, forests, or deserts.

Also volcanic eruptions can influence ice formation in clouds. During the eruption of the Eyjafjöllajökull volcano in Iceland in April 2010 the scientists at Leipzig studied the effect of the volcanic ash on cloud glaciation with two LIDAR systems located at Leipzig and at Maisach, close to Munich, Germany. “When there is volcanic ash in the atmosphere, ice can obviously form at relatively high temperatures as soon as enough humidity is available”, reports Dr. Patric Seifert, scientist at IfT. Without volcanic ash, ice is usually formed only at temperatures below -25 degree Celsius.

The studies were supported by funding of the “Pakt für Forschung und Innovation“ of the Leibniz Association.

The studies were supported by the Europeean Commission in the frame oft he lidar research networkk EARLINET. 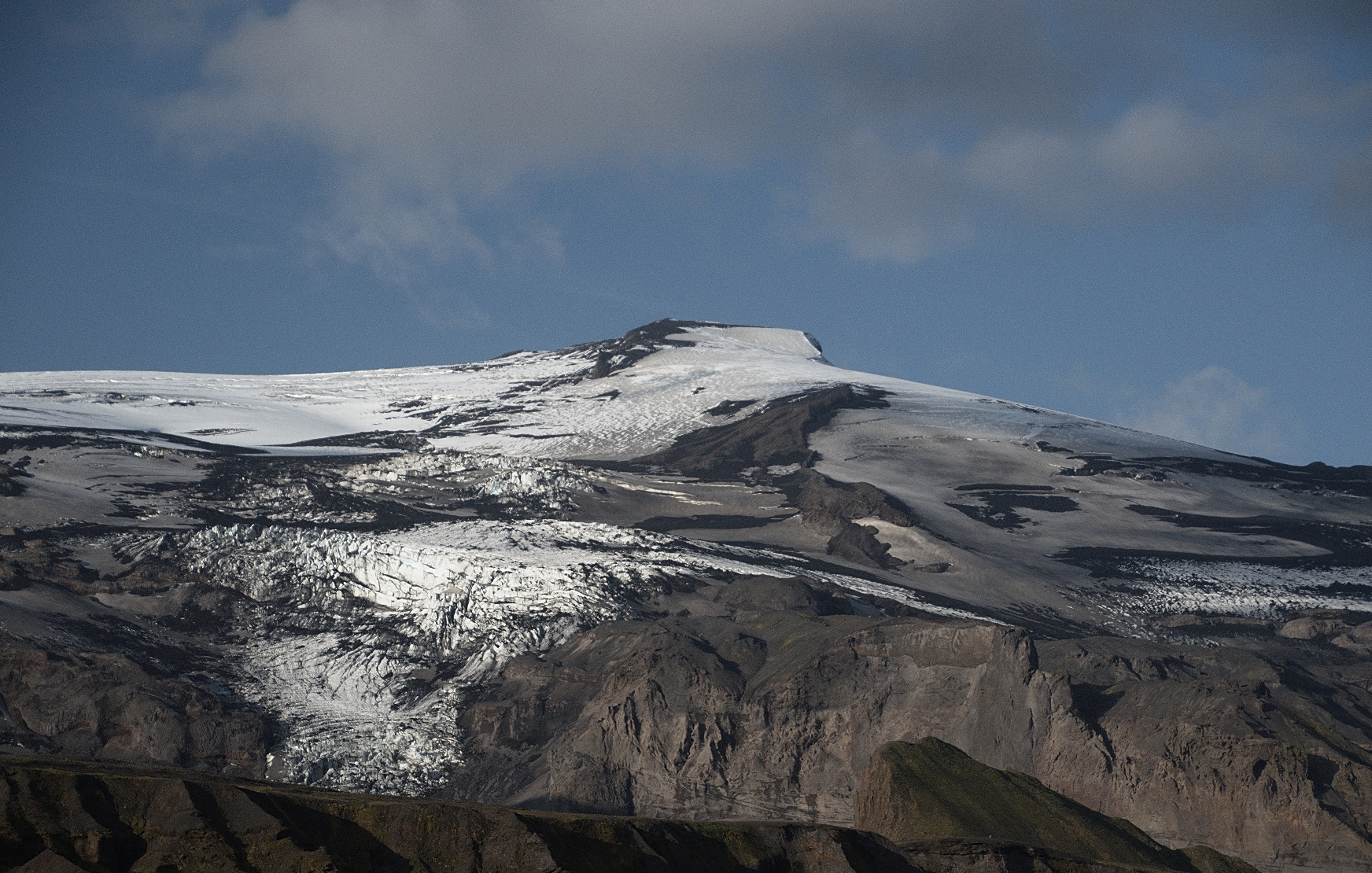 Summit of the icelandic volcano Eyjafjallajökull which stopped air traffic above after its eruption in April 2010. Relics of the dark-gray ash are visible. Photo: Tilo Arnhold/IfT 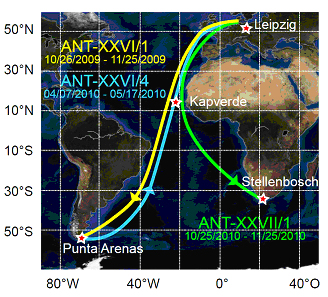 Locations of the places and cruise routes from which data for the studies at IfT were collected. Source: Thomas Kanitz/IfT 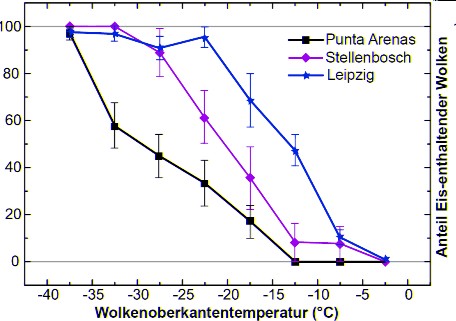