MOSAiC expedition observed strong smoke layer over the North Pole for the first time, revealing a new upwelling process in the troposphere

Leipzig. Smoke from wild fires could increase ozone depletion in the upper layers of the atmosphere and thus further enlarge the ozone hole over the Arctic. This was recognized  according to data from the international MOSAiC expedition, which studied the region around the North Pole in 2019/20. A connection between unusually high temperatures, severe droughts and increasing wildfires with a lot of smoke in the lower stratosphere and strong ozone depletion over the polar regions is likely. If this assumption is confirmed, it will add a new aspect to the debate on the consequences of climate change, writes an international research team led by the Leibniz Institute for Tropospheric Research (TROPOS) in the journal Atmospheric Chemistry and Physics (ACP).

The cause of the recent record low ozone levels over the Arctic was previously thought to be due to changes in the prevailing wind systems that lead to lower temperatures in the polar vortex, a low-pressure area in the Arctic stratosphere at an altitude of 15 to 50 kilometres. With the detection of the smoke from wildfires in the boreal coniferous forests over the Arctic, the new hypothesis stresses a new impact of climate change, which could also have health effects in the neighbouring regions of Europe, North America and Asia via complex feedback mechanisms.

The new hypothesis is based on extensive evaluations of measurements of aerosols at various locations: a central role were the measurements during the international MOSAiC expedition, when the German icebreaker Polarstern drifted through the ice of the Arctic Ocean at the North Pole for a year starting autumn 2019. The largest polar expedition in history with more than 80 research institutes from over 20 nations under the leadership of the Helmholtz Centre for Polar and Marine Research (Alfred Wegener Institute  - AWI), also included extensive studies of the atmosphere. For the first time, a coherent, vertically resolved view of the aerosols and clouds in the central Arctic during the winter half-year up to an altitude of 30 km was obtained. For this, a multi-wavelength lidar of TROPOS had measured the air layers over the research icebreaker. In 369 days, 640 million laser pulses were sent into the sky and 112 gigabytes of data were collected. The data from the central Arctic around the North Pole were supplemented by lidar data from the Koldewey Aerosol Raman Lidar (KARL) of the AWI in Ny-Ålesund on Spitsbergen as well as from the CALIPSO Earth observation satellite of NASA and CNES.

Where does the smoke over the North Pole come from?
The atmosphere above the North Pole has long been considered to be very clean because the region north of the Arctic Circle is only sparsely populated. The expedition with  the research icebreaker Polarstern 2019/20 provided the first insight into a world that was previously inaccessible to research and also surprised atmospheric researchers: "From the first day of MOSAiC expedition in the Arctic at the end of September 2019, we observed a conspicuous aerosol layer with a broad maximum at an altitude of about 10 km, directly above the local tropopause. According to our Raman lidar observations, the layer had clear signatures of wildfire smoke up to about 12-13 km altitude. A comparison with continuous lidar measurements in Leipzig and Ny-Ålesund showed that many particles had already been hovering at this height since August 2019, which could not be explained solely by the eruption of the Raikoke volcano in the Pacific in summer 2019," reports Dr Ronny Engelmann, who was the first of five TROPOS researchers to supervise the lidar measurements on RV Polarstern. Smoke particles reflect the laser light of the lidar differently than particles from volcanic eruptions. Analyses of the air flow using so-called backward trajectories pointed to the exceptionally strong and long-lasting wildfires in central and eastern Siberia in July and August 2019, when forests near Lake Baikal burned in an large area of about 1000 km × 2000 km. Analyses of satellite imagery later showed that the 2019 fire season in Siberia was one of the strongest in the last two decades.

The summer wildfires in Siberia thus caused that the aerosol concentration in the lower stratosphere of the central Arctic was increased tenfold during the winter half-year. The exact effects of the smoke particles in the stratosphere on the climate system are still largely unexplored. On the one hand, radiation fluxes could change, on the other hand, the aerosols could serve as ice nucleation nuclei and thus form cirrus clouds.

How do the smoke particles reach altitudes of 10 km, the typical cruising altitude of intercontinental flights?

So-called fire clouds (pyrocumulus, or pyroCb for short) are known from warmer regions, where the heat from the fire at ground level is so strong that the air is transported upwards like in a lift, carrying the smoke into the stratosphere. These "lift clouds" were also observed in the catastrophic fires in Australia in 2019 or on the west coast of North America in 2020. However, no powerful thunderstorms developed over the fire areas in Siberia in the summer of 2019. "We therefore suspect that the dark, carbonaceous smoke particles warmed up so much due to sunlight that their surrounding air slowly rose. This is the only plausible explanation for efficient vertical transport over several kilometres," explains Kevin Ohneiser from TROPOS, who is investigating the influence of wildfires on the atmosphere in his doctoral thesis. "So-called self-lift processes have been reported several times after large wildfires - but only for smoke layers in the stratosphere, i.e. above about 10 km altitude. To the best of our knowledge, there are no reports in the literature of self-lift processes in the troposphere, i.e. below an altitude of 10 km. Calm weather conditions without strong winds could be one of the most important conditions for this phenomenon in the troposphere, which we have probably registered for the very first time, if our observations are confirmed."

What does smoke have to do with the ozone hole?
It is already known that a strong, long-lasting polar vortex causes strong ozone depletion: The polar vortex is a large low-pressure area in the stratosphere at heights of 15 to 50 km, which ensures very low temperatures. At temperatures below -78°C, polar stratospheric clouds (PSC) with ice crystals form. These clouds particles provide the surface for chemical reactions that produce chlorine compounds that, together with bromine, deplete ozone when exposed to sunlight. Such reactions can also take place on the surface of sulphate particles. They can occur during volcanic eruptions that transport sulphur dioxide up into the stratosphere: As early as the beginning of the 1990s, a loss of ozone of up to 30 per cent could be detected over Central Europe during the first winter after the great volcanic eruption of Pinatubo.
During the MOSAiC expedition, the strong, cold and persistent polar vortex shaped the atmosphere of the Arctic from 15 km altitude above RV Polarstern from January to April 2020. The Arctic spring of 2020 was characterised by very cold temperatures and the strongest Arctic polar vortex of the last 40 years, which led to record levels of polar stratospheric clouds and extreme ozone depletion in the lower stratosphere: an evaluation of March/April 2020 ozone sondes from different parts of the Arctic had shown an extreme decrease at 18 km altitude. Without the Montreal Protocol, the already extreme ozone losses in the Arctic in 2020 would probably have caused an even significantly larger ozone hole like the one in the Antarctic, according to simulations by other researchers published simultaneously in the scientific journal ACP.
Regular ozone profile measurements indicated not only a layer of extremely low ozone concentration at altitudes of 15 to 20 km, but also significantly below-average ozone levels at altitudes of 10 to 15 km. "We find a clear connection between the occurrence of wildfire smoke in the lowest part of the stratosphere and the anomalously strong ozone depletion," emphasises Dr Albert Ansmann from TROPOS.

The data now published from the MOSAiC expedition show that smoke can persist for a long time in the atmosphere of the polar regions and that even small amounts can disrupt this sensitive ecosystem. Human activities can have a massive impact on the upper layers of the atmosphere and thus the climate in the Arctic, even at great distances. The results are of particular importance because wildfires are increasingly being understood as a climate risk: The latest report of the Intergovernmental Panel on Climate Change (IPCC) stated in August 2021 that weather conditions favouring wildfires have become more likely in the last century and expects the frequency of fires to increase further with global warming. Tilo Arnhold

The data were produced as part of the international expedition MOSAiC (Multidisciplinary drifting Observatory for the Study of the Arctic Climate (#MOSAiC20192020 & #AWI_PS122_00). The studies were funded by the European Union (Horizon 2020 (#H2020-INFRAIA-2014-2015) & ACTRIS-2 Integrating Activities (#654109) and the German Research Foundation (DFG) within the Transregio Collaborative Research Centre "ArctiC Amplification: Climate Relevant Atmospheric and SurfaCe Processes, and Feedback Mechanisms (AC)3" (#268020496 - TRR 172). The development of the lidar inversion algorithm to analyse the Polly data was supported by the Russian Science Foundation (#16-17-10241).

The Leibniz Institute for Tropospheric Research (TROPOS) is member of the Leibniz Association, which connects 97 independent research institutions that range in focus from the natural, engineering and environmental sciences via economics, spatial and social sciences to the humanities. Leibniz Institutes address issues of social, economic and ecological relevance. They conduct knowledge-driven and applied basic research, maintain scientific infrastructure and provide research-based services. 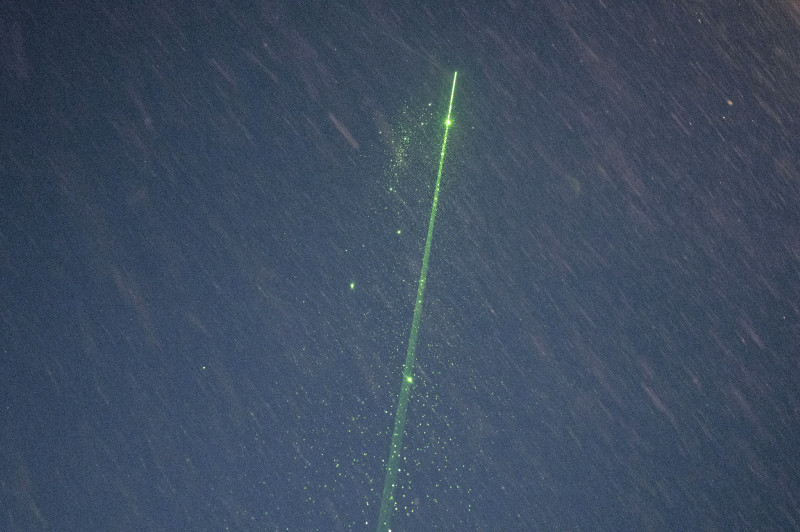 Lidar of the OCEANET container during the polar night at MOSAiC. Photo: Ronny Engelmann, TROPOS 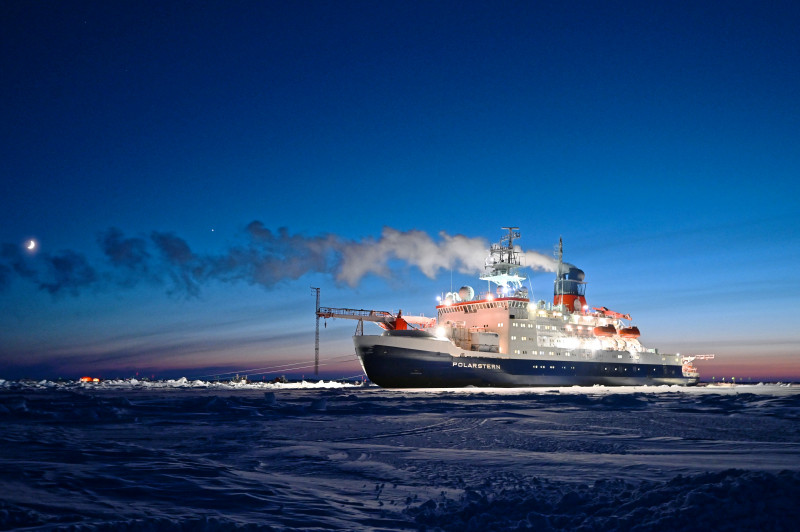 The atmospheric measuring instruments incl. lidar container of TROPOS in the polar night at MOSAiC in the Arctic. Photo: Hannes Griesche, TROPOS 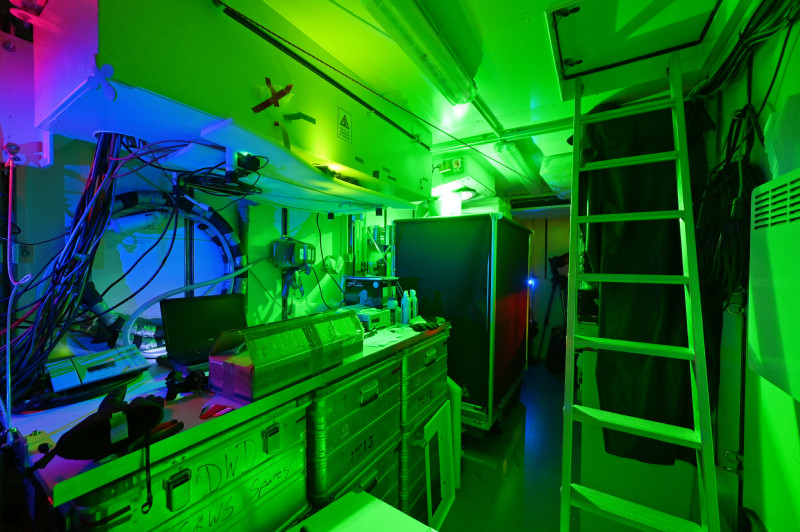 Interior of the OCEANET container with the green laser of the TROPOS lidar. Photo: Martin Radenz, TROPOS