Pollen reflects more sunlight than previously known, and makes up to one third of the total amount of aerosol particles in the atmosphere. Aerosol particles influence optical depth which provides a measure of the opacity of the atmosphere. These results, reported by scientists of the Gwangju Institute of Science and Technology (GIST) in Korea and the Leibniz-Institute of Tropospheric Research (TROPOS), are published in the research journal Atmospheric Environment. This study is the first to investigate the optical properties of natural pollen with a laser operating at 532-nm emission wavelength.

Pollen spreads in the air and is considered to be one of the main causes of allergies – and its impact on human health may increase due to climate change. For that reason, there is great interest in the research of pollen and its spread and distribution in the atmosphere. In addition, pollen is a considerable natural source of pollution in the atmosphere where it scatters sunlight - so-called corona effects have been known about for a long time.

Due to the extremely short measurement times in the near field of the laser, it is difficult to measure close to the ground where pollen is usually found. Furthermore, specific measurements are needed to separate man-made air pollution from natural sources of pollution such as pollen. The first person to use lasers from the ground to investigate pollen is Prof. Kenneth Sassen of the University of Alaska in Fairbanks, USA. He collected pollen emissions data over Alaskan forests in 2008.

The results presented in this new study are the first investigations of this kind outside of North America. By using more sophisticated laser measurement techniques, the results also measure some properties of airborne pollen. “For the first time different optical properties of pollen in the air were measured. Of specific interest is the light-extinction coefficient, as this parameter allows us to determine the so-called optical depth of the atmosphere. The optical depth determines how much sunlight from space arrives on the Earth’s surface, and this measurement has a major influence on our planet’s temperature”, summarizes Dr. Young Min Noh from the Gwangju Institute of Science and Technology (GIST).

A polarization lidar, a tool used to observe particles in the atmosphere with a laser beam, was used by the South Korean–German research team to observe the vertical distribution of pollen in May 2009 at GIST in Gwangju (South Korea). The tool measures the difference in time between the emission of a laser pulse and receiving the back-reflected laser pulse, which allows the distance between the instrument and the reflecting object to be computed - similar to the way in which radar works. Scientists can determine physical properties of the reflecting objects by measuring the polarization changes of the back-reflected laser light. The measurements showed that pollen can be found at the highest point in the atmosphere during noontime due to air convection. Strong changes in polarization were reported during the morning at around 9 am local time at up to 500 m above the ground; at heights from 1.5 to 2 km above the ground between noon and 2 pm local time; and near the ground after 5 pm local time. These results are described by the research team in another publication that was published in Atmospheric Chemistry and Physics which is an open access journal of the European Geosciences Union (EGU). “In this study we report on the backscatter coefficient of pollen for the first time. We were able to determine this parameter by using the so-called lidar-depolarization technique. For this, we separated the laser light that is reflected by pollen from the reflection signal of the total atmospheric aerosols”, emphasizes Dr. Young Min Noh. “The pattern of the backscatter signals shows that pollen particles from trees are distributed in the lower part of the atmosphere of cities. This is caused through small-scale convection, air updrafts and downdrafts, and, if there are good weather conditions, high temperatures and wind speed as well as low relative humidity.” The month of May is the main pollen season in Korea. Simultaneous with the laser measurements, the scientists also collected pollen with pollen traps so that measurements at the ground could be compared to the data taken in the atmosphere. The Sun’s irradiation was measured with a photometer. From the results the researchers concluded that pollen can be a significant natural source of aerosol particles during times of strong pollen emissions. “We assume that the strong pollen emissions in densely wooded areas of the Northern Hemisphere, such as Alaska, Canada, Scandinavia and Siberia, may significantly influence the optical properties of the atmosphere, particularly at the start of the growing period in spring. Although our observations only represent a small portion of the overall large-scale effects, they nevertheless highlight the importance of pollen emissions”, Dr. Detlef Müller reports. Dr Müller worked at TROPOS until recently and, since late 2008, has also been leading the lidar group based at GIST in South Korea. Dr. Müller brought 15 years’ experience in the development of lidar instrumentation from Leipzig to Korea and helped in developing a special instrument customized to handle the complicated air pollution within East Asia. In this region, desert dust from Central Asia mixes each spring with strongly polluted air produced by East Asian mega cities like Beijing and Seoul. For a long time, the complex mixture of different types of air pollution made it difficult to clearly separate the different sources of air pollution.

The daily pattern of the influence of pollen on the optical depth of the atmosphere, as observed by the Korean-German research team, can help to improve data of Earth observing satellites like CALIPSO (Cloud-Aerosol-Lidar and Infrared Pathfinder Satellite Observations) and other aerosol sensors that do not adequately take into account the influence of pollen in their data analysis algorithms. In addition, the researchers hope that these new results can improve pollen forecasting to give a better quality of life to allergy sufferers in the future.

Pollen is not the only biological source of airborne particles that raises many research questions. Novel lidar measurement methods are planned to help investigate the effects of bacteria, spores, and fungi on human health and crop yield. “Dust is known to act as carrier of bacteria. We observed an increase of the number of people being hospitalized after large dust outbreaks over South Korea, suffering from problems of the respiratory tract, eye inflammations and other strong allergic reactions. Similar conditions have been observed in other regions around the world, such as in the Sahel Zone of Africa, where cases of meningitis may have been caused by bacteria carried by dust”, explains Dr. Müller who recently joined the University of Hertfordshire, United Kingdom. He is funded by the Royal Society through the Wolfson Research Merit Award which is given to outstanding scientists in the UK. Dr. Müller continues to develop and improve lidar technology for climate research, and also for investigating the spread of spores and fungi in agriculture in order to find new ways of reducing crops loss. It is estimated that approximately 16% of the global crop yield is lost each year due to fungal diseases.

Further Information can be obtained from

The Leibniz Institute of Tropospheric Research (TROPOS) is member of the Leibniz Society which consists of 86 independent research institutes. Research at these institutes ranges from natural-, engineering- and environmental research to economy, regional and social research to the humanities. Leibniz institutes work on questions relevant to society, economy and ecology. The institutes focus on knowledge- and application-oriented basic research. They operate scientific infrastructure and offer research-based service. The Leibniz society puts focus on knowledge transfer toward policy, science, economy, and the public sector. Leibniz institutes are in intensive cooperation with universities – including the ScienceCampi -, with industry and other partners in Germany and abroad. The institutes undergo high-quality, independent and transparent evaluations. Because of their importance for Germany, the Federal Government and the federal states fund the Leibniz-Society together. The Leibniz-Institutes employ around 16.500 staff, among them are 7.700 scientists. The total annual budget of the institutes is 1.4 Billion Euro. http://www.leibniz-gemeinschaft.de 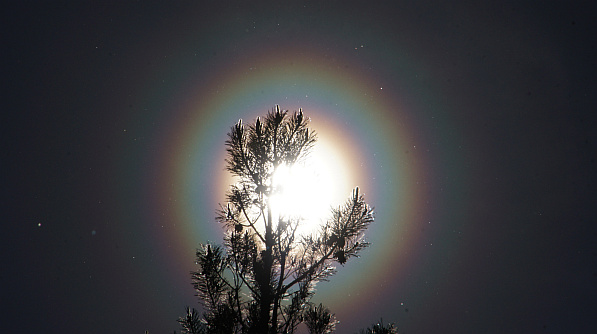 Pine pollen corona on 1 May 2011 at near Herzberg (Brandenburg, Germany). The pollen of flowering pines forms a halo around the sun, which should be observed only with protective glasses as at a solar eclipse. Typically for pine pollen is a corona that is not circular but stretched vertically.
Photo: Manfred Heinrich, Leipzig 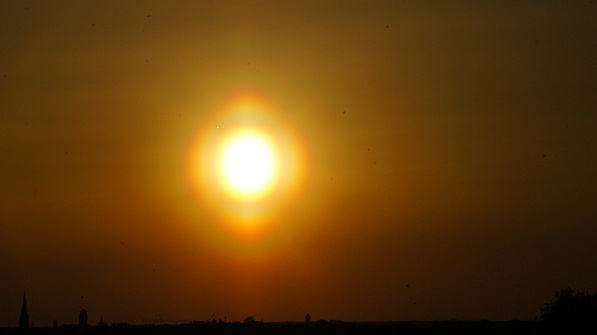 Pine pollen corona on 19 May 2013 in Leipzig. The pollen of flowering pines forms a halo around the sun, which should be observed only with protective glasses as at a solar eclipse. Typically for pine pollen is a corona that is not circular but stretched vertically.
Photo: Manfred Heinrich, Leipzig 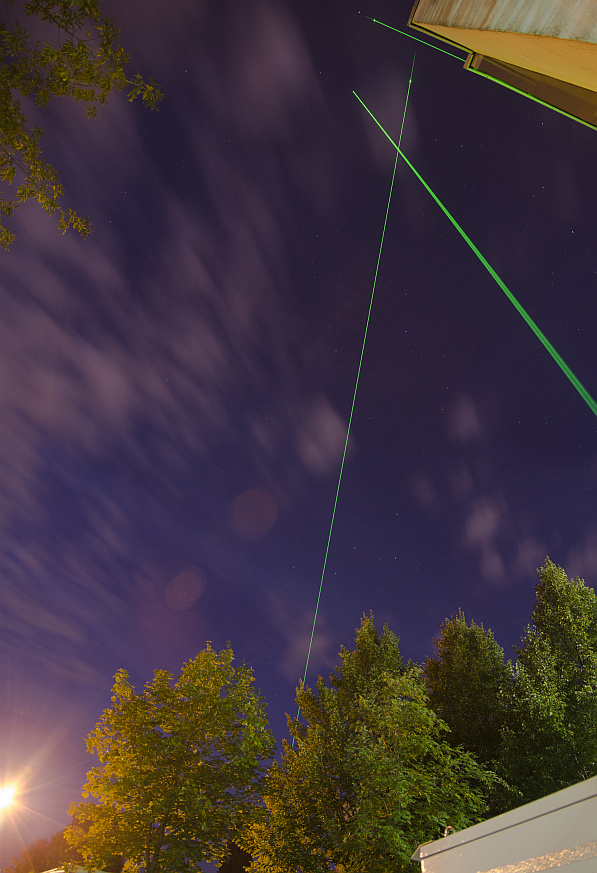 Lidar in use at the TROPOS in Leipzig. With the portable mini-Raman lidar "Polly" a fully automatic system has been developed here, allowing the daily aerosol observations even without much infrastructure. "Polly" has also been used in field experiments in Perl River Delta in China or the Amazon in Brazil.
Photo: Tilo Arnhold/TROPOS 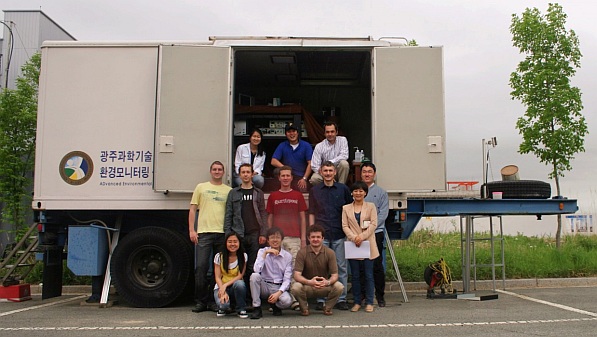 Lidar Team of the Gwangju Institute of Science & Technology (GIST) in Korea in front of the mobile lidar of the group.
Photo: GIST