Leipzig. It is already known since 1875 that hydrocarbons can be oxidized by oxygen. Up to now, this so-called “autoxidation process” has been investigated solely in the condensed phase. An international team of scientists with participation of the Leibniz-Instituts für Troposphärenforschung (TROPOS) provided evidence for the importance of this process in the atmosphere as well. Laboratory experiments have been conducted with latest analytical techniques allowing to discover the reaction mechanism of autoxidation as far as possible. This mechanism describes how hydrocarbons from vegetation are converted to products with up to 12 O-atoms at a time scale of seconds. The resulting, highly oxidized products represent extremely low-volatility compounds effecting particle growth substantially, and subsequently the formation of clouds and the climate system as stated by the scientist from Germany, Finland and from US in the journal Angewandte Chemie. This new insight is useful for a better understanding for the impact of natural emissions for air quality and climate.

Forests emit large amounts of volatile organic compounds (VOC). Alpha-pinene and limonene, the typical flavour of conifer forest, belong to them. Their reaction products form the so-called secondary organic aerosol. In this case, gases are converted to particle constituents. The atmospheric particles are able to reflect solar radiation or act as nuclei for cloud droplets. These processes have a major influence on climate and are therefore of special scientific interest. However, the corresponding model calculations are very inaccurate at the moment because there are still large gaps in our knowledge concerning the role of natural emissions for the process of particle formation and growth. As long as these processes are poorly understood, it is difficult to give accurate predictions. This uncertainty also affects all climate models.

Large uncertainties do exist especially for the growth of newly formed particles towards cloud nuclei on which water condenses, and thus, initiating the formation of clouds. The particle growth starting from a diameter of about two through to 100 nanometers requires probably low-volatile organic vapors, as has been speculated. These "extremely low-volatility organic compounds (ELVOCs)” have been detected recently and this finding was published in 2014 in the journal NATURE. Latest improvements of measurement techniques made their detection possible.

Potential formation pathways for ELVOCs were very speculative. In the present study scientists from TROPOS and from the University of Helsinki in collaboration with US colleagues solve this mystery as far as possible. Intermediates forming finally ELVOCs were identified as a result of laboratory experiments conducted in the flow tube in TROPOS as well as from field experiments in Melpitz near Leipzig and in Hyytiäla (south Finland). “Our investigations showed that the most abundant monoterpenes, like alpha-pinene and limonene, produce highly oxidized RO2 radicals with up to 12 O-atoms within a time scale of seconds, and subsequently also the corresponding closed-shell products. The overall process in the atmosphere proceeds in a similar way as the well-known autoxidation in the condensed phase” states Dr. Torsten Berndt from TROPOS. Autoxidation is a chemical process converting slowly substances with the help of oxygen from air under room-temperature conditions.  The autoxidation is responsible for a couple of processes, for instance for embrittling of plastics and the spoilage of food.

„Field measurements above the meadows in Melpitz and in the boreal forest in Hyytiäla confirm the finding from laboratory and point to the importance of the autoxidation for the oxidation of hydrocarbons in the atmosphere. Very probably, the highly oxidized RO2 radicals and the corresponding close-shell products have a very low volatility and are crucial for the growth of atmospheric aerosols. Thus, they influence the interactions between aerosols, clouds and the climate”, emphasises Tujia Jokinen from the University of Helsinki. The new findings will help to better assess the effects of vegetation and different land use for climate. As a result, the climate models can be improved, which up to now did not describe particle growth in a proper way.

Centre of Excellence in Atmospheric Science – From Molecular and Biological processes to The Global Climate http://www.atm.helsinki.fi/FCoE/

SMEAR II station of the University of Helsinki in Hyytiäla http://www.atm.helsinki.fi/SMEAR/index.php/smear-ii 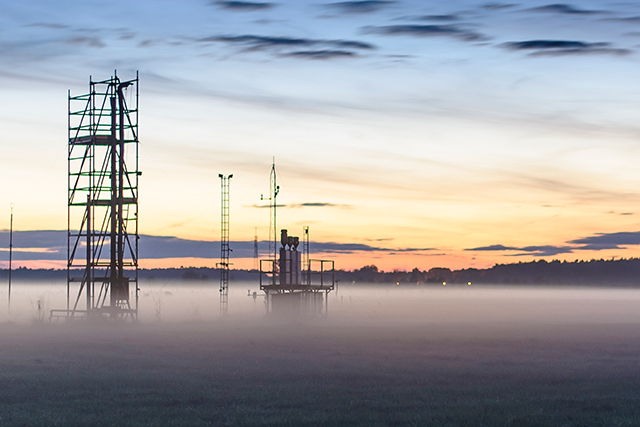 Field measurements at the TROPOS station in Melpitz near Leipzig helped to identify the intermediates on the way to the formation of ELVOCs. Data from Melpitz showed clearly the influence of the vegetation and the differences between day and night.
Photo: Tilo Arnhold/ TROPOS