In the Transregio project TR 172 "Arctic Amplification (AC)3", the focus of TROPOS-ACD during the first phase was on the investigation of marine carbohydrates and their association with ice nucleating particles (INP). The studies showed that the simple sugar glucose can serve as a biological INP marker in the central Arctic Ocean. In seawater, phytoplankton composition and concentration show a clear link to glucose. Glucose is probably formed or released together with biogenic INPs. Glucose was particularly enriched in the SML of the ice-margin zone (MIZ) and the melt ponds, two oceanic compartments with a high proportion of melting sea ice. During the MOSAiC (“Multidisciplinary drifting Observatory for the Study of Arctic Climate”) campaign, a variety of water and aerosol samples were collected throughout the annual drift to further investigate the relationship between marine carbohydrates and INP. 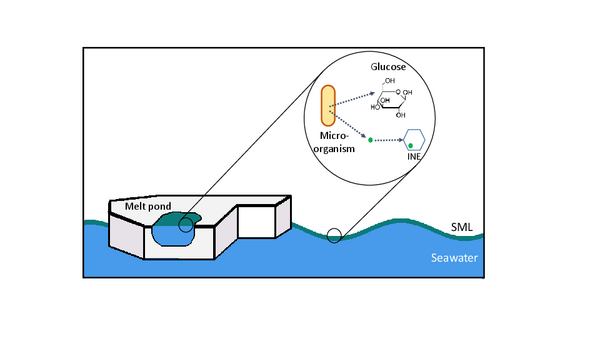 In the marine surface film of Arctic melt ponds (Melt Ponds) and the ice edge zone (MIZ), INE and glucose produced by microorganisms are highly enriched