Drought of the century in the Middle Ages - with parallels to climate change today?

Leipzig. The transition from the Medieval Warm Period to the Little Ice Age was apparently accompanied by severe droughts between 1302 and 1307 in Europe; this preceded the wet and cold phase of the 1310s and the resulting great famine of 1315–21. In the journal Climate of the Past, researchers from the Leibniz Institutes for the History and Culture of Eastern Europe (GWZO) and Tropospheric Research (TROPOS) write that the 1302–07 weather patterns display similarities to the 2018 weather anomaly, in which continental Europe experienced exceptional heat and drought. Both the medieval and recent weather patterns resemble the stable weather patterns that have occurred more frequently since the 1980s due to the increased warming of the Arctic. According to the Leibniz researchers’ hypothesis based on their comparison of the 1302–07 and 2018 droughts, transitional phases in the climate are always characterized by periods of low variability, in which weather patterns remain stable for a long time.

The published study presents preliminary findings of the Freigeist Junior Research Group on the Dantean Anomaly (1309–1321) at the Leibniz Institute for the History and Culture of Eastern Europe (GWZO). Funded by the Volkswagen Stiftung, the group is investigating the rapid climate change in the early 14th century and its effects on late medieval Europe.

The Great Famine (1315–1321) is considered the largest pan-European famine of the past millennium. It was followed a few years later by the Black Death (1346–1353), the most devastating pandemic known, which wiped out about a third of the population. At least partially responsible for both of these crises was a phase of rapid climate change after 1310, called the “Dantean Anomaly” after the contemporary Italian poet and philosopher Dante Alighieri. The 1310s represent a transitional phase from the High Medieval Climate Anomaly, a period of relatively high temperatures, to the Little Ice Age, a long climatic period characterized by lower temperatures and advancing glaciers.

The Leipzig-based researchers are studying the regions of northern Italy, southeastern France, and east central Europe. These areas have been little studied with regard to the Great Famine thus far, but offer a variety of historical sources for the reconstruction of extreme meteorological events and their socio-economic effects, including how vulnerable societies were at the time. “We want to show that historical climate change can be reconstructed much better if written historical sources are incorporated alongside climate archives like tree rings or sediment cores. The inclusion of humanities research clearly contributes to a better understanding of the social consequences of climate change in the past and to drawing conclusions for the future,” explains Dr Martin Bauch from the GWZO, who heads the junior research group.

The study now published evaluates a large number of historical sources: chronicles from present-day France, Italy, Germany, Poland, and the Czech Republic. Regional and municipal chronicles provided information on historical city fires, which were an important indicator of droughts. Administrative records from Siena (Italy), the County of Savoy (France) and the associated region of Bresse shed light on economic developments there. Using the data, it was possible, for example, to estimate wheat and wine production in the French region of Bresse and compare it with wheat production in England. Since these yields depend strongly on climatic factors such as temperature and precipitation, it is thus possible to draw conclusions about the climate in the respective production years.

While the summer of 1302 was still very rainy in central Europe, several hot, very dry summers followed from 1304 onwards. From the perspective of climate history, this was the most severe drought of the 13th and 14th centuries. “Sources from the Middle East also report severe droughts. Water levels in the Nile, for example, were exceptionally low. We therefore think that the 1304–06 drought was not only a regional phenomenon, but probably had transcontinental dimensions,” reports Dr. Thomas Labbé from the GWZO.

Based on the recorded effects, the team reconstructed the historical weather conditions between the summer of 1302 and 1307. Through evaluations of the 2018 drought and similar extreme events, it is now known that, in such cases, a so-called “precipitation seesaw” usually prevails. This is the meteorological term for a sharp contrast between extremely high precipitation in one part of Europe and extremely low precipitation in another. “This is usually caused by stable high and low pressure areas that remain in one region for an unusually long time. In 2018, for example, very stable lows lay over the North Atlantic and southern Europe for a long time, which led to heavy precipitation there and an extreme drought in between in central Europe,” explains meteorologist Dr Patric Seifert from TROPOS, who was responsible for reconstructing the large-scale weather situations for the study. The analysis of the possible large-scale weather situations indicates that between 1303 and 1307, a strong, stable high pressure system predominated over central Europe, which explains the extreme drought in these years.

The analysis of these historical weather situations is particularly interesting given the ongoing discussion about how climate change in the Arctic affects weather patterns in Europe. In recent decades, the Arctic has warmed more than twice as much as other regions of the world. This phenomenon, called “Arctic Amplification,” is being studied by a DFG Collaborative Research Centre led by the University of Leipzig. One theory assumes that the disproportionate warming of the Arctic causes the temperature differences—and thus also the atmospheric dynamics—between the mid-latitudes and the region around the North Pole to decrease. As a result, according to a common hypothesis, weather patterns may persist longer than in the past. “Even if it was a phase of cooling in the Middle Ages and we are now living in a phase of man-made warming, there could be parallels. The transitional period between two climate phases could be characterized by smaller temperature differences between the latitudes and cause longer-lasting large-scale weather patterns, which could explain an increase in extreme events,” Seifert cautions.

In their study, the researchers recorded a noticeable coincidence between the periods of drought and urban fires. Fires were a great danger for the densely constructed cities in the Middle Ages, where there were no fire brigades like there are today. The best documented fire between 1302 and 1307 was probably in Florence, where over 1,700 houses burned on 10 June 1304. Sources for Italy and France showed a correlation between extreme drought and fires. “We think our analysis is the first to find a correlation between fires and droughts over a two-hundred-year period. Large urban fires usually followed droughts by a year. The wooden structures in medieval houses did not dry out immediately. But once they did, they ignited very easily,” explains Bauch. Contemporaries were also aware of the connection between drought and fire: during dry periods, citizens were obliged to place buckets of water next to their front doors—a primitive sort of fire extinguisher, to be kept available at all times. It was only later that municipalities organized fire brigades, for example in Florence around 1348. Major infrastructural measures in response to the droughts have survived in the cities of northern Italy: Parma and Siena invested in larger, deeper wells, and Siena also bought a harbor on the Mediterranean coast, which it expanded after the drought years of 1302–04 in order to be able to import grain and become less dependent on domestic production.

“According to our analysis, the drought of 1302–1307 was a once-in-a-century event with regard to its duration. No other drought reached these dimensions in the 13th and 14th centuries. The next event that came close was not until the drought of 1360–62, which stretched across Europe and for which there indications in the historical record in Japan, Korea, and India,” concludes Annabell Engel, M.A., from GWZO. In connection with global warming, researchers expect more frequent extreme events such as droughts. While numerous studies have already documented strong fluctuations in the 1340s, shortly before the plague epidemic, the first decade of the 14th century, unlike the 1310s, has been the focus of little research so far. The Leibniz researchers have now been able to show for the first time that exceptionally dry summers between 1302 and 1304 to the south of the Alps and 1304 and 1307 north of the Alps were the result of stable weather conditions and disparately distributed precipitation. The study thus sheds new light on the first years of the 14th century with its dramatic changes and draws a link to modern climate changes. “However, it is difficult to draw conclusions about future climatic developments in the 21st century from our study. While climate fluctuations in the 14th century were natural phenomena, in the modern age, humans are exerting artificial influence on the climate, as well,” note Bauch and Seifert.

The Leibniz Institute for the History and Culture of Eastern Europe (GWZO) and the Leibniz-Institute for Tropospheric Research (TROPOS) are member of the Leibniz Association, which connects 96 independent research institutions that range in focus from the natural, engineering and environmental sciences via economics, spatial and social sciences to the humanities. Leibniz Institutes address issues of social, economic and ecological relevance. They conduct knowledge-driven and applied basic research, maintain scientific infrastructure and provide research-based services.

High-resolution images for download:
(use free of charge if source is acknowledged)

Drought 2018
In the journal Climate of the Past, researchers from the Leibniz Institutes for the History and Culture of Eastern Europe (GWZO) and Tropospheric Research (TROPOS) write that the 1302–07 weather patterns display similarities to the 2018 weather anomaly, in which continental Europe experienced exceptional heat and drought.
Photo: Tilo Arnhold, TROPOS
(Grain harvest on 08 Oct 2018 in the Vogtland district)
Download

Drought 1302-1307
Probable constellations of high- (red) and low-pressure (blue) anomalies over Europe which can explain the weather patterns reconstructed from the historical sources.
Source: Patric Seifert, TROPOS
Download as jpg
Download as pdf 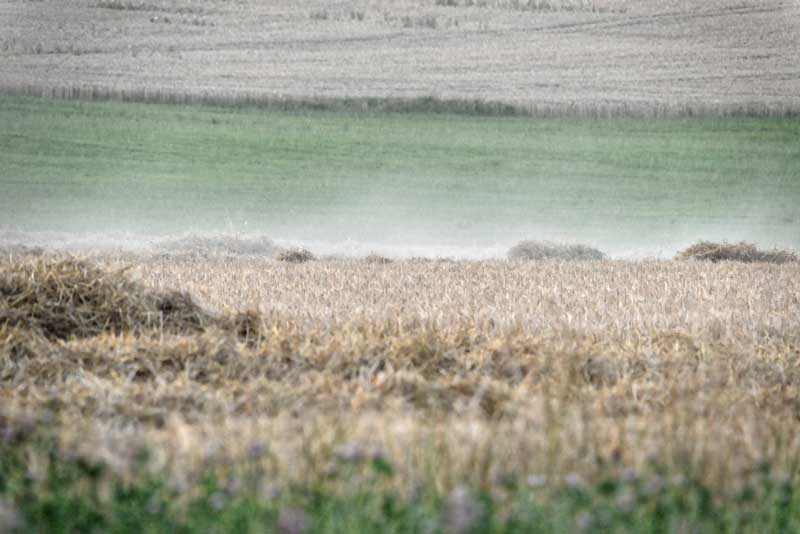 In the journal Climate of the Past, researchers from the Leibniz Institutes for the History and Culture of Eastern Europe (GWZO) and Tropospheric Research (TROPOS) write that the 1302–07 weather patterns display similarities to the 2018 weather anomaly, in which continental Europe experienced exceptional heat and drought. Photo: Tilo Arnhold, TROPOS 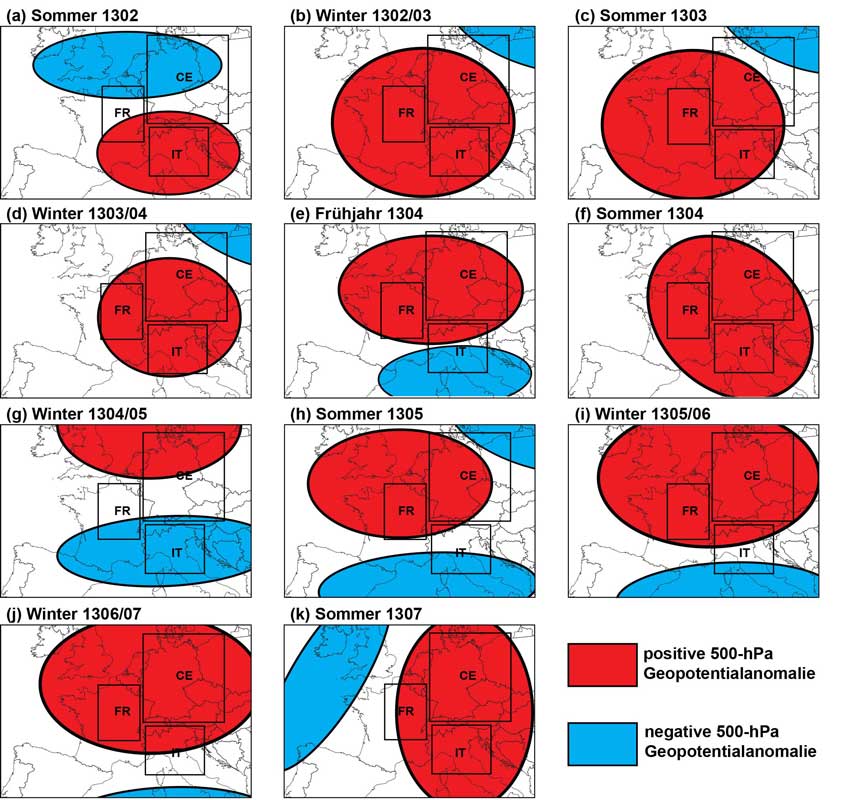 Probable constellations of high- (red) and low-pressure (blue) anomalies over Europe which can explain the weather patterns reconstructed from the historical sources. Source: Patric Seifert, TROPOS