Leipzig. The smoke from the extreme forest fires on the US West Coast in September 2020 travelled over many thousands of kilometres to Central Europe, where it continued to affect the atmosphere for days afterwards. A comparison of ground and satellite measurements now shows: The forest fire aerosol disturbed the free troposphere over Leipzig in Germany as never before. An evaluation by an international research team led by the Leibniz Institute for Tropospheric Research (TROPOS) revealed an extraordinary optical thickness on 11 September 2020, which attenuated sunlight by a third. The study, published in Geophysical Research Letters, is the first publication to show that ESA's novel Aeolus satellite can not only reliably measure global wind profiles but also aerosols in the atmosphere as it was shown by comparing Aeolus measurements with lidar measurements from the ground. The Centre National de Recherches Météorologiques (CNRM) of the University of Toulouse, the German Aerospace Center (DLR) and the European Space Agency (ESA) were involved in the study.

Since August 2018, a new type of research satellite has been orbiting the Earth, named after a Greek wind god - Aeolus. The aim of Aeolus is to actively measure wind from space and thus improve weather forecasting. On board of this satellite of the European Space Agency (ESA) is the "Atmospheric Laser Doppler Instrument" (ALADIN), a high-performance laser. ALADIN is the first instrument in space that can actively measure vertical profiles of wind speed. It uses the principle of a light radar (short: Lidar from "LIght Detection And Ranging"). A signal is emitted and the reflection provides information about location and distance. The Doppler effect is then used to measure the wind speed at different heights in the atmosphere. To validate the laser measurements in space, they are compared with laser measurements from the ground. Several research groups from Germany are involved in this effort within the framework of the EVAA initiative (Experimental Validation and Assimilation of Aeolus observations). TROPOS, for example, measures with its lidar devices every Friday evening and Sunday morning when the Aeolus satellite flies over Leipzig. The data from ground and space can then be compared. On 11 September 2020, this resulted in the rare constellation that the extraordinary plume of smoke from the Californian forest fires could be measured over Leipzig simultaneously from ground and from space.

"Using revolutionary laser technology, Aeolus is currently the only satellite in the world that can measure profiles of horizontal wind speed as well as the backscatter and extinction of aerosols and clouds independently. The satellite thus provides valuable information on the radiative properties of these smoke aerosols," emphasises Dr Sebastian Bley of TROPOS, who has been involved in the Aeolus project at the European Space Agency's (ESA) ESRIN research centre for the past three years. "It is expected that this unique configuration will contribute to improved predictions of such global smoke dispersion but also of weather in general."

In September 2020, the heat from the extreme forest fires on the US West Coast transported the smoke to high altitudes. Once high up, it was then transported with the jet stream across North America and the Atlantic to Europe. In Leipzig, Germany, the smoke layer appeared at an altitude of around 12 kilometres on the morning of 11.09.2020 and sank to an altitude of around 5 kilometres in the course of the day. This is shown by the data from the PollyXT lidar at TROPOS. Lidar measurements in Leipzig confirmed the strong attenuation of the direct sunlight on this Friday: "It was - measured by the Aerosol Optical Thickness (AOT) - the strongest influence of forest fire aerosol on the free troposphere above Leipzig ever observed since the beginning of regular lidar observations in 1997", reports Dr Holger Baars from TROPOS, “The free troposphere is the region of the atmosphere in which the weather takes place but the direct influence from the ground is low. We were able to estimate an average mass concentration of forest fire aerosol of 8 micrograms per cubic metre between 4 and 11 km altitude. At the peak it was even 22 micrograms per cubic metre - that's quite remarkable for these altitudes." Saturday and Sunday were hazy days despite cloudless skies. The UV index of the Federal Office for Radiation Protection (BfS), among others, also showed how strongly the smoke layers dampened solar radiation in Saxony: the TROPOS station in Melpitz near Torgau registered about a quarter less UV radiation at noon on 12 September 20 than would have been possible under clear sky. The unusual state of the atmosphere was particularly striking at sunset with a distinctive milky-yellow light.

The researchers were able to confirm the origin of the smoke using a computer model: The backward simulation proves that the air masses that arrived at noon on 11 September at an altitude of 8.5 km above Leipzig originated from the west coast of North America, where intense fires took place days before. The frequency and intensity of fires in California continued to increase during the first week of September as satellite images show. Slightly weaker fires were observed in Oregon, Washington and Montana. "Due to the prevailing winds, the travel time of the smoke from the US West Coast to Europe was only about 3 to 4 days. The air masses even made the approximately 3000 kilometres across the Atlantic Ocean between Newfoundland and Ireland at high speed in only one day (9 September)," explains Martin Radenz from TROPOS.

Earth observation satellites have become an important tool for environmental research in recent decades, documenting climate change globally. However, the need for continuous data on the one hand and the limited lifetime of satellites on the other hand pose major challenges to research: "Measuring the lidar ratio (a measure of backscatter behaviour and thus an indication of aerosol type) with Aeolus directly from space is a novelty and catapults research on aerosol-cloud interactions into a new era," underlines Dr Ulla Wandinger. "The results presented here show that Aeolus is partially able to bridge the gap between NASA's CALIPSO mission, which is being phased out, and the upcoming EarthCARE mission." EarthCARE is a joint Japanese-European mission that aims to study the effects of clouds and aerosol particles on the Earth's radiation budget. The satellite is scheduled for launch in early 2023. "Aeolus was designed to measure wind. The fact that it also provides data on particles is a very welcome by-product. However, in situations where the composition of the aerosol layers is less clear, it would be helpful to be able to measure the polarisation as well. Since the laser light is rotated differently when reflected on mineral dust, volcanic ash or forest fire aerosol, it is easier to determine where the particles originate that influence solar radiation and cloud formation. EarthCARE (Earth Clouds, Aerosols and Radiation Explorer) will be able to do this. We are therefore keeping our fingers firmly crossed for this satellite as well," says Dr Ulla Wandinger. Tilo Arnhold

ADM Aeolus – Measuring the wind from space with a laser for the first time (DLR press release, 21 Aug 2018):
https://www.tropos.de/en/current-issues/press-releases/details/adm-aeolus-measuring-the-wind-from-space-with-a-laser-for-the-first-time 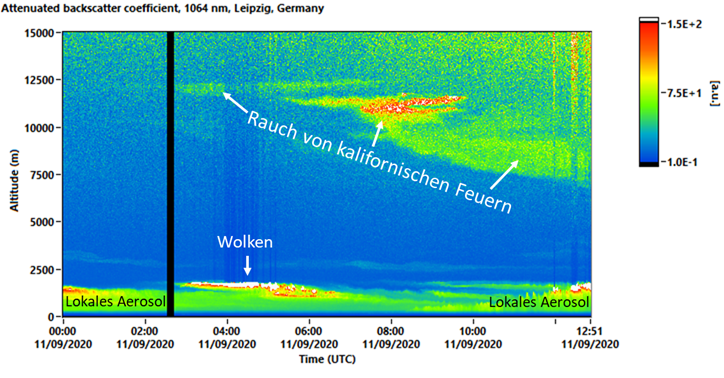 Lidar measurement on Friday, 11.09.20, at TROPOS in Leipzig: The smoke cloud (yellow-red) moves over Leipzig from about 2 a.m. UTC (= 4 a.m. CEST) and decreases slightly during the day. Strongest intensity was around 8 a.m. UTC (= 10 a.m. CEST). Graphic: Holger Baars, TROPOS

The origin of the air masses could be traced by model to the US west coast. Source: HYSPLIT model / NOAA Air Resources Laboratory's (ARL) 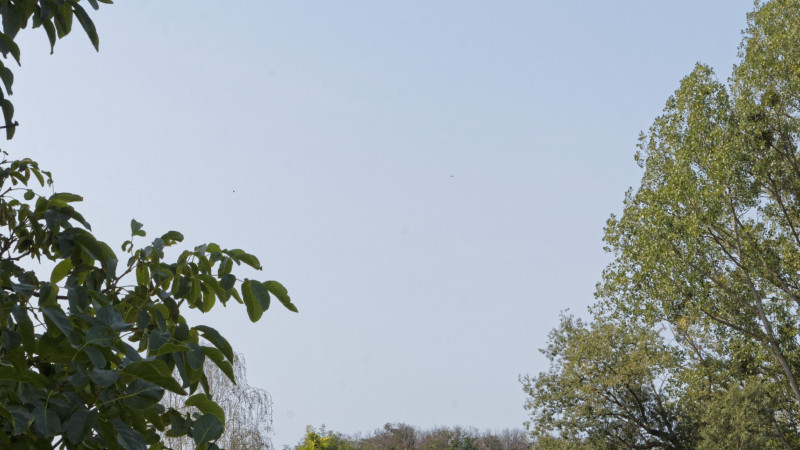 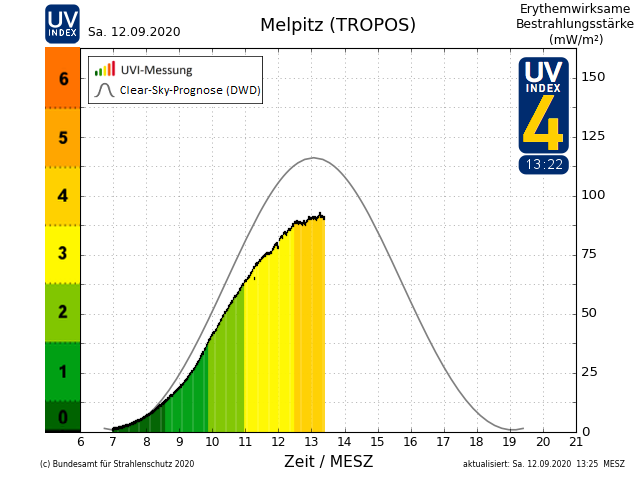 The UV index of the Federal Office for Radiation Protection (BfS), among others, shows how strongly the smoke layers dampen the solar radiation in Saxony as well. The TROPOS station in Melpitz near Torgau registered about a quarter less UV radiation at noon on 12.09.20 than would have been possible under cloudless skies. Source: BfS-UV-Index/TROPOS 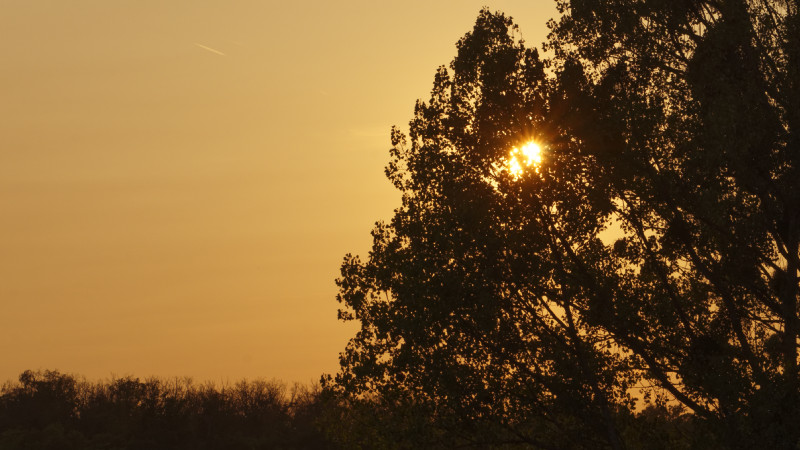 The sunset on 12.09.20 was milky yellow - a sign of dust in the atmosphere. Photo: Tilo Arnhold, TROPOS