Leipzig/Dresden. In connection with the effects of the COVID-19 pandemic, satellite measurements made headlines showing how much the air pollutant nitrogen dioxide (NO2) had decreased in China and northern Italy.  In Germany, traffic density is the most important factor. However, weather also has an influence on NO2 concentrations, according to a study by the Leibniz Institute for Tropospheric Research (TROPOS), which evaluated the influence of weather conditions on nitrogen dioxide concentrations in Saxony 2015 to 2018 on behalf of the Saxon State Office for Environment, Agriculture and Geology (LfULG). It was shown that wind speed and the height of the lowest air layer are the most important factors that determine how much pollutants can accumulate locally.

In order to determine the influence of various weather factors on air quality, the team used a statistical method that allows meteorological fluctuations to be mathematically removed from long-term measurements. The air quality fluctuates, in some cases very strongly, due to different emissions and the influence of the weather. Until now, however, it has been difficult to estimate, what share legal measures such as low emission zones or diesel driving bans have and what share the weather influences have in the actual air quality? With the method used, this will be easier in the future.

Nitrogen dioxide (NO2) is an irritant gas which attacks the mucous membrane of the respiratory tract, causes inflammatory reactions as an oxidant and increases the effect of other air pollutants. As a precursor substance, it can also contribute to the formation of particulate matter. Limit values have been set in the EU to protect the population: For nitrogen dioxide, an annual average value of 40 micrograms per cubic metre of air applies (μg/m³). To protect the health of the population, measures must be taken if these limit values are not complied with. In 2018/2019, for example, various measures were taken in Germany, ranging from a reduction in the number of lanes (e.g. in Leipzig) to driving bans for older diesel vehicles (e.g. in Stuttgart).

To evaluate the effectiveness of such measures, it would be helpful to determine the exact influence of weather conditions. The Saxon State Office for Environment, Agriculture and Geology (LfULG) therefore commissioned TROPOS to carry out a study on the influence of weather factors on NO2 concentrations and provided its measurement data from the Saxon air quality measurement network and meteorological data for this purpose. The researchers were thus able to evaluate data from 29 stations in Saxony over a period of four years, which represent a cross-section of air pollution - from stations at traffic centres to urban and rural background stations and stations on the ridge of the Erzgebirge mountains. They also calculated the height of the lowest layer in the atmosphere and incorporated data from traffic counting stations in Leipzig and Dresden into the study. A method from the field of machine learning was used for the statistical modelling, the application of which in the field of air quality was first published by British researchers in 2009.

In this way, the study was able to demonstrate that the traffic density at all traffic stations is most significantly responsible for nitrogen oxide concentrations. However, two weather parameters also have a significant influence on nitrogen dioxide concentrations: wind speed and the height of the so-called mixing layer. The latter is a meteorological parameter that indicates the height to which the lowest layer of air, where the emissions mix, extends. "It was also shown that high humidity can also reduce the concentration of nitrogen dioxide, which could be due to the fact that the pollutants deposit more strongly on moist surfaces. However, the exact causes are still unclear," says Dominik van Pinxteren.

The statistical analysis has also enabled the researchers to remove the influence of the weather from the time series of pollutant concentrations: Adjusted for the weather, the concentration of nitrogen oxides (NOx) decreased by a total of 10 micrograms per cubic meter between 2015 and 2018 on average over all traffic stations in Saxony. In urban and rural areas and on the ridge of the Erzgebirge, however, NOx concentrations tend to remain at the same level. Even though there have been some improvements in air quality in recent years, there are good scientific arguments for further reducing air pollution.

In a way, this also applies to premature conclusions from the corona crisis: in order to find out how strong the influence of the initial restrictions on air quality actually was, the influence of the weather would have to be statistically removed in a longer series of measurements. To this end, investigations for the Leipzig area are currently underway at TROPOS, as is a Europe-wide study of the EU research infrastructure for short-lived atmospheric constituents such as aerosol, clouds and trace gases (ACTRIS), the German contribution to which is coordinated by TROPOS. Tilo Arnhold

Dominik van Pinxteren, Sebastian Düsing, Alfred Wiedensohler, Hartmut Herrmann (2020): Meteorological influences on nitrogen dioxide: Influence of weather conditions and weathering on nitrogen dioxide concentrations in outdoor air 2015 to 2018. Series of publications of the LfULG, issue 2/2020 (in German only)
https://publikationen.sachsen.de/bdb/artikel/35043
This study was commissioned by the State Office for Environment, Agriculture and Geology (LfULG).

Until now, the influence of weather has made it difficult to assess the effectiveness of traffic measures in reducing the exposure to the air pollutant nitrogen dioxide. This is mainly due to its formation: Nitrogen oxides (NOx) are mainly produced in combustion processes. In conurbations, road traffic is considered the most important source, with the largest share coming from diesel engines. Diesel engines emit nitrogen dioxide and, above all, nitrogen monoxide (NO), which is converted to NO2 in the atmosphere by complex photochemical processes: High solar radiation can therefore lead to high NO2 and ozone (O3) levels, especially in urban areas. Also in summer, high temperatures, especially in rural areas, can lead to high concentrations of biogenic volatile organic compounds (BVOC) and thus to an increased conversion of NO to NO2. However, the extent to which concentrations of trace gases accumulate in the air above the ground also depends on the weather: It has long been known that weak winds can cause high concentrations of pollutants. Two unfavourable factors come together, especially in inversion weather conditions in winter: Because of the cold temperatures, there is a lot of heating and the high emissions accumulate in a small volume of air. High concentrations of pollutants are then the result. In particular, valley locations then act like a pot on which the inversion layer in the atmosphere has been put on a lid.

The concentrations of nitrogen dioxide (NO2) in Saxony have decreased on average since 2000. Until 2018, however, exceedances of the annual NO2 limit of 40 micrograms per cubic meter were still measured. In October 2019, for example, the city of Leipzig was forced to implement immediate measures from the Clean Air Plan and to throttle the traffic flow on several entry roads, because the modelling had suggested that the NO2 values in these roads were too high.

The applied method is based on so-called "boosted regression trees". "These are decision trees, with which a mathematical algorithm is 'trained' in such a way that it can independently decide on the basis of the data whether a factor has an influence on the pollutant concentration and if so, how high this influence is. A decision tree consists of a sequence of "if-then" decisions, which in its structure resembles a tree that starts at the root and branches out further and further until it reaches the "leaves", as the final points of a decision tree are also called," explains Dr. Dominik van Pinxteren from TROPOS, who has made the method applicable to Saxony. "A disadvantage of a single regression tree is its usually only moderately good prediction quality. To improve this, modern applications therefore calculate ensembles consisting of many trees. The prediction is averaged from the entire "forest", so to speak. In this way, a "weak learner", i.e.a single tree with limited depth, is gradually built up or boosted to become a "strong learner", resulting in powerful models that have become widely used in areas of machine learning".

The team around Dominik van Pinxteren was able to statistically calculate that e.g. at the measuring station Dresden-Bergstraße the nitrogen dioxide concentration decreases significantly due to wind: from 0 to 1 m/s wind speed by 25 µg/m3 and between 1 and 3 m/s by another 10 µg/m3. NO2 also decreases by 10 µg/m3 when the height of the mixing layer increases from very close to the ground to an average height of 500 m. 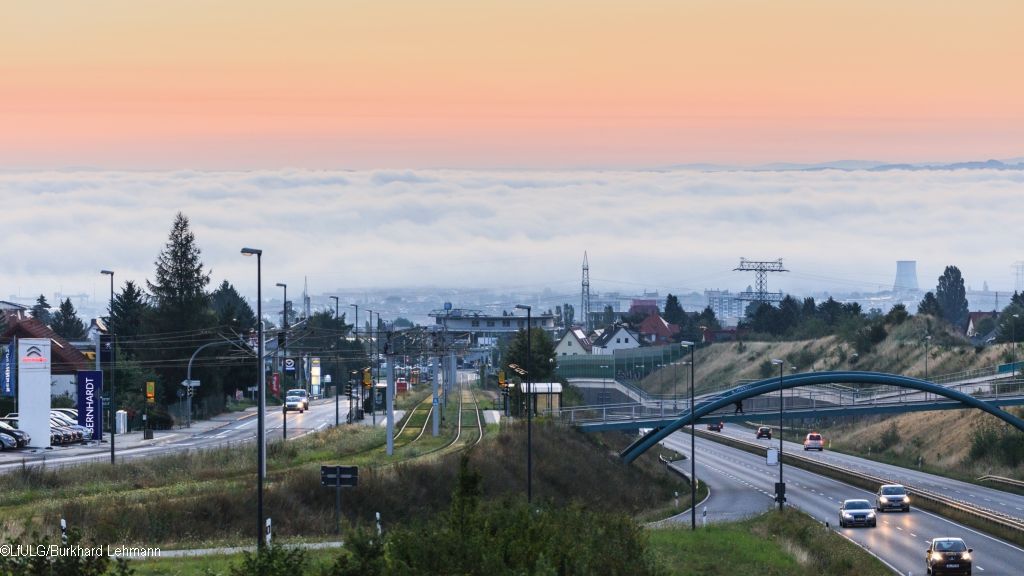 Traffic density, wind and air stratification influence the pollution with the air pollutant nitrogen dioxide, according to the conclusion of a TROPOS study commissioned by the LfULG, for which data from 29 stations in Saxony were evaluated - including Dresden. Photo: Burkhard Lehmann, LfULG