1. Goals of the CyCARE experiment

Aerosols influence clouds by changing their colour and their ability to form snow and rain. This interaction between aerosols and clouds is one of the immediate topics of weather and climate research. Cyprus is a unique place where this interaction can be studied especially well, because the island is influenced by a large variety of air pollutants, desert dust, and marine salt particles (See Fig. 1). Cyprus is located in an arid climate zone and, hence, "on the edge" between moderate mid-latitude and dry desert climate. Rain is vital for the island, but annual rainfall changes storngly between years. The eastern Mediterranean is a hot-spot area of climate change but direct measurements of aerosols, clouds and their dynamic interactions in this area are missing.

The CyCARE campaign - a common initiative between the Cyprus University of Technology, Limassol and TROPOS -  will fill a gap in the global understanding of aerosol-cloud interaction. The role of different aerosol types on cloud and rain formation will be determined. These investigations will help answering the question how rain patterns will develop in future and what the effect of climate change on arid regions might be. 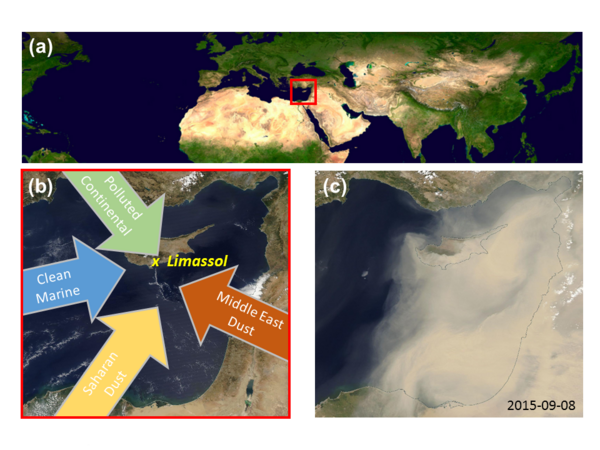 Fig. 1.: The different aerosol sources around Cyprus. (a) The section of Earth's northern hemisphere showing the "desert belt" stretching from the Sahara in northern Africa until the Taklamakan desert in northern China. The position of Cyprus in the middle of the desert belt is marked. (b) The main types and directions of aerosols advection to Cyprus. (c) Satellite image of the extreme dust event on Cyprus on 8 September 2015.

The Leipzig Aerosol and Cloud Remote Observations System (LACROS) is operating on the premises of the Cyprus University of Technology from October 2016 until fall 2017. LACROS is composed of different remote-sensing instruments. A Raman polarization lidar of type PollyXT emits a laser beam in order to study aerosols and a 35-GHz cloud radar is used to study cloud properties using microwave radiation. Different other measurement systems are deployed to measure the properties of the precipitation on ground (disdrometer), aerosol and cloud dynamics (Doppler lidar) and water vapor and liquid water (microwave radiometer). An overview about the station and its instruments is given in Fig. 2.

Impressions of the CyCARE campaign.