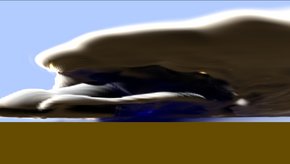 One important research field at the interface between in-situ measurements, remote sensing and modeling is the high resolution simulation of the atmospheric boundary layer including cloud processes.The fundamental basics for the used model are the compressible Euler equations, which are widely used in computational flow models. Those equations have been extended with additional equations for the balance of energy and the phase transitions for the water content in the atmosphere. Therefore processes like condensation and evaporation, droplet growth, freezing and melting of cloud droplets and the formation of precipitation of rain and snow can be represented. Currently included water phases are water vapor, cloud water, rain, cloud ice and snow with the respective particle number concentrations for each phase.

One special feature, which distinguishes the numerical model applied here from other weather forecast models, is the used resolution. In dependence on the studied process, the domain size may vary from some few to over one hundred kilometers. The size of one grid cell is typically in the range of some meters up to several decameters.

The so computed three dimensional fields allow insight into the interdependencies between different cloud and precipitation processes and the atmospheric dynamics, and with that also to the mass and energy transport from the surface to the free troposphere and vice versa.

Another important aspect is the effort to give a physically consistent description of the current state of the atmosphere and to provide an intersection point for the many different measured variables, which are collected using LIDARs, RADARs, satellites and airborne platforms, for example.