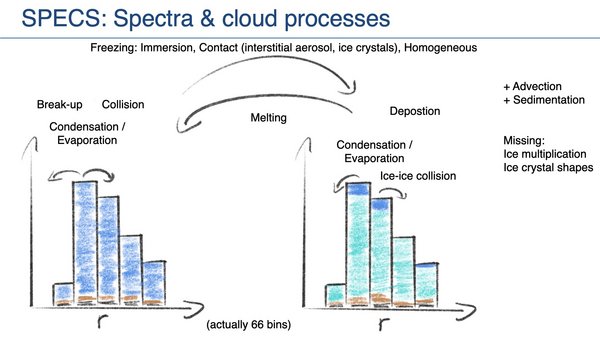 Fig. 1: Schematic representation of the spectral description of hydrometeors and the microphysical processes that shift number and mass within the spectrum, between the spectra as well as between condensate and vapor phase.

SPECS has been continuously developed and refined. The formation of liquid droplets, their interaction with water vapor (condensation, evaporation) and their collision processes within a cloud were described in a discrete spectrum  (Simmel et al., 2002; Simmel and Wurzler et al., 2006). This stage of development of the model system has been successfully applied to the simulation of low orographic clouds (Simmel et al., 2005). With the description of immersion and contact freezing (Diehl et al., 2006, 2007), important processes for the formation of cloud ice were introduced. For this purpose, a second discrete spectrum for ice particles was implemented. The developed description of the freezing and melting processes is intermediate between the spectrum for liquid droplets and that for ice particles. In recent years, the description of ice microphysics has been further refined (Simmel et al., 2015).

SPECS can be embedded in different dynamic forcings. Originally developed as a pure box model, SPECS can also be applied within air parcel models for idealized cases (constant updraft velocity, convective forcing, trajectory from orography or 3D models, observed updraft velocity profiles, ...). In addition, SPECS was coupled to the meteorological forecast model of the German Weather Service COSMO (formerly LM, now ICON) (Grützun et al., 2008). With COSMO-SPECS, the feedbacks on the dynamics of the more complex description of the cloud microphysics by SPECS compared to COSMO’s original 1- or 2-moment cloud microphysics can be investigated. Furthermore, the model system allows the simulation of realistic scenarios, which can be used to accompany field campaigns (Figs. 3 & 4). 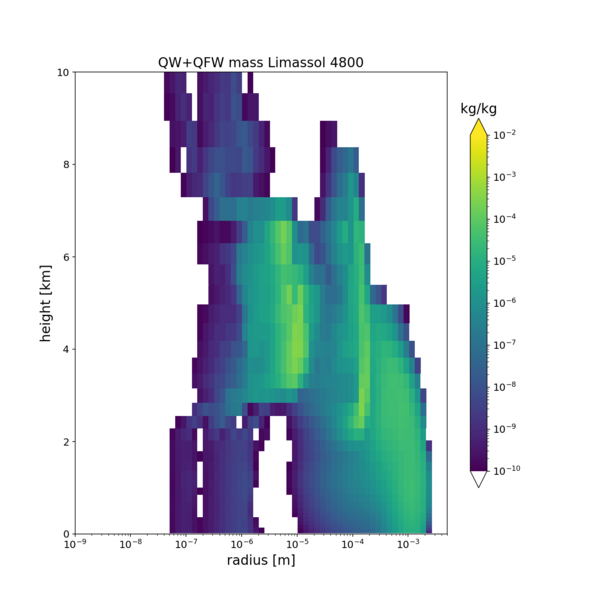 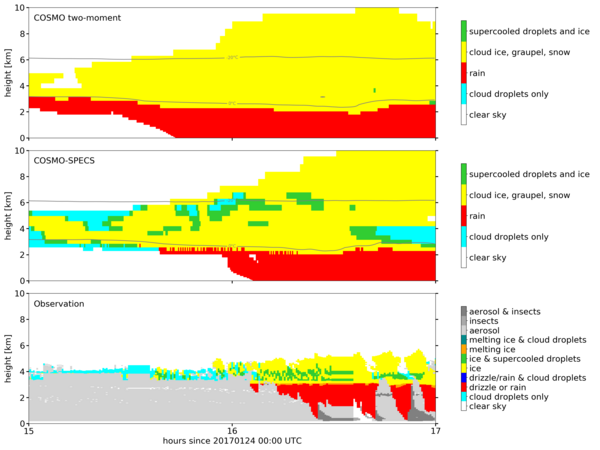 Fig. 3: Time-height section of hydrometeor classification comparing COSMO (2-moment scheme) and COSMO-SPECS for a simulation over Cyprus on 24.01.2017 (CyCare -campaign). 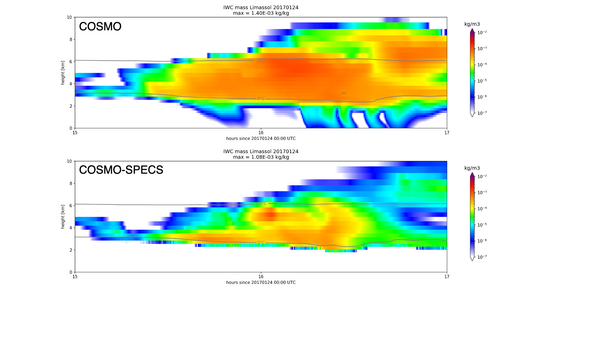