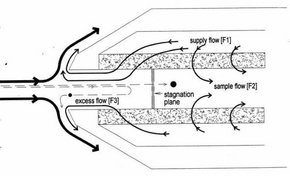 At TROPOS various Counterflow Virtual Impactors (CVI) have been developed and built for the in-situ collection of cloud droplets and ice particles and simultaneous separation of non-activated particles. The various CVI systems have made significant contributions to research projects for the analysis of residual particles of cloud droplets and ice particles in real clouds. The functional principle of the CVI is based on the virtual impaction of the cloud particles on an artificially generated counterflow, which emanates from the inlet tip against the collection direction. This prevents the entire gas phase and the smaller interstitial particles from entering the CVI, while the larger cloud particles (droplets, ice particles) overcome the counterflow due to their higher inertia and are collected. The cloud particles enter a dry and particle-free carrier air which leads to a complete evaporation/sublimation of the water or ice phase. In this way, dry droplet or ice particle residues are released, which can be interpreted as cloud condensation or ice nuclei and analyzed microphysically and chemically.

The CVI collection and measurement technology is used both on the ground on mountain measurement stations and on research aircrafts, respectively. In order to increase the scientific significance in cloud field experiments, a complementary interstitial inlet is operated in addition to the ground-based CVI measurements for the parallel collection and characterization of the non-activated particles and the gas phase . The CVI versions available at TROPOS are: