Punta Arenas/Leipzig. Clouds in the southern hemisphere reflect more sunlight than those in the northern hemisphere. The reason is a more frequent occurrence of liquid water droplets, which results from an interplay between updrafts and a cleaner environment. In a study published in the journal Atmospheric Chemistry and Physics, a team of researchers led by the Leibniz Institute for Tropospheric Research (TROPOS) found a  stronger influence of updrafts than expected. The new results were made possible by long-term measurements in Leipzig (Germany), Limassol (Cyprus) and Punta Arenas (Chile).

Covering three years, the measurements in Punta Arenas are the longest dataset on cloud properties  obtained with ground-based lidar and radar in the Southern Ocean. From 2018 to 2021, an international team from University of Magallanes (UMAG), TROPOS and University of Leipzig had conducted extensive observations of aerosols, clouds, wind and precipitation in the very south of Chile as part of the DACAPO-PESO field experiment. The researchers used two datasets from the northern hemisphere locations of Leipzig and Cyprus to put their findings into global context. Data from the CyCARE field campaign on Cyprus were collected in the years 2016 to 2018 in collaboration with researchers from the Cyprus University of Technology and the ERATOSTHENES Centre of Excellence in Limassol.

The main objective of the measurements in the pristine environment at the southern tip of South America was to study the atmosphere and to learn more about the interactions between aerosols and clouds in a region where there is hardly any long-term data available so far. To address the lack of observations, TROPOS brought the two containers of the LACROS mobile atmospheric observatory together with instrumentation of the University of Leipzig to Punta Arenas. There, the observations were conducted together with UMAG's Laboratory for Atmospheric Research. The instrumentation of LACROS consists of multiple lidars, radars, radiometers, sun photometers and others. These measurements were supplemented by aerosol filter samples from Cerro Mirador, a 600 m high hill close by.

Originally, the measurements were planned for one year as a contribution to the "Year of Polar Prediction in the Southern Hemisphere" (YOPP-SH). But due to the global COVID-19  pandemic and the resulting travel restrictions, the measurements were extended by two years and only finished at the end of 2021. "Scientifically, this delay was of great benefit," says Kevin Ohneiser, PhD student at TROPOS. Because the huge "Black Summer" wildfires of 2019/20 occurred in Australia during this period. Their smoke was transported more than 10,000 kilometres across the Pacific to South America and could be observed there up to heights of 25 km with the laser-based investigations until the measurements were completed at the end of 2021. Since the air in southern Chile is usually very clean, this type of air pollution was immediately noticeable and underlines the global influence of the large forest fires on climate.

"With DACAPO-PESO, we have filled a gap in measurements that has long existed for the southern hemisphere. The freely available data can now help to improve current climate models," explains Dr Boris Barja from UMAG, who played a decisive role on-site in ensuring that the instruments could be in continuous operation despite the Covid-19-related travel restrictions.

With more than 10 follow-up projects, 20 conference papers and 10 research publications to date, the project has been very successful scientifically. Further publications are  close to finalization. Teresa Vogl, Phd student from University of Leipzig, for instance, is currently working on a method to characterize precipitation formation with a machine learning-based cloud radar algorithm.

The recently achieved main purpose of the project was however to investigate the differences of thin cloud layers over Leipzig, Limassol and Punta Arenas. Due to a high percentage of oceans covering the Earth in the southern hemisphere, the atmosphere in this region is cleaner, i.e. contains fewer aerosol particles. This difference is especially strong in the free troposphere - the air masses at higher altitudes, unaffected from local pollution sources. "Fewer particles mean fewer ice nuclei in the atmosphere. But it is precisely these that are needed to cause cloud droplets to freeze into ice crystals at temperatures between 0 and -40°C. Therefore, clouds ice up much less in the mid-latitudes of the southern hemisphere and contain more liquid water at the same temperatures. This means that they influence the incident sunlight and also the thermal radiation emitted from the Earth's surface differently than in the north. This is one explanation why global climate models are still not able to represent the radiation balance of the southern hemisphere with sufficient accuracy," summarises Dr Patric Seifert from TROPOS. In the temperature range between -24 and -8°C, the lack of ice nuclei caused the clouds over Punta Arenas to form ice on average 10 to 40 percent less often than the clouds over Leipzig. The ice mass produced by the liquid water clouds is also reduced by at least a factor of 2.

However, contrary to previous studies, differences in atmospheric pollution are not the only cause of the observed contrasts, especially at even lower temperatures. The investigations in southern Chile showed that the clouds are often influenced by so-called gravity waves. The strong westerly wind from the Pacific collides with the Andes mountains, is displaced upwards and creates these gravity waves. "By measuring the up- and downward winds within the clouds, we were able to detect clouds that had been influenced by these waves and filter them out of the overall statistics. This allowed us to show that these gravity waves, and not the lack of ice nuclei, are mainly responsible for the excess of cloud droplets at temperatures below -25°C," explains Dr Martin Radenz from TROPOS, who recently obtained the Phd degree for his work on this subject. " However, it is currently unclear whether this phenomenon only influences clouds in southern Chile. How important are gravity waves for the formation of clouds and precipitation in other regions of the Southern Ocean? How often do gravity waves occur over the open ocean, which covers most of the Earth's surface between 30 and 70 degrees south and is currently only observed by satellites? Further measurements of air motion in clouds are needed to further constrain the role of ice nuclei in the apparent excess of liquid water in clouds. In the near future, we plan to work with our partners to investigate these questions at other locations in the Southern Hemisphere, such as Antarctica and New Zealand, and ideally also from aboard research vessels. Because from space those observations are not possible at the moment."

The two LACROS containers will be back at TROPOS in Leipzig at the end of January and will then be prepared for their next deployment. Within the framework of ACTRIS-D, the German contribution to the European research infrastructure for aerosols, clouds and trace gases, three new instruments will then be integrated. With a new sun photometer, microwave radiometer and 94 Ghz cloud radar, LACROS will go to the Swiss Alps in November to investigate artificially generated ice clouds. Tilo Arnhold

The Leibniz Institute for Tropospheric Research (TROPOS) is a member of the Leibniz Association, which connects 97 independent research institutions that range in focus from the natural, engineering and environmental sciences via economics, spatial and social sciences to the humanities. Leibniz Institutes address issues of social, economic and ecological relevance. They conduct knowledge-driven and applied basic research, maintain scientific infrastructure and provide research-based services. 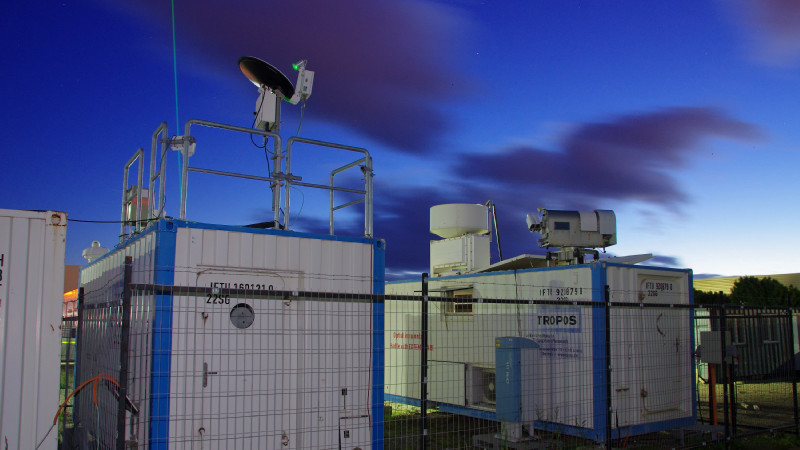 The TROPOS measurement containers during DACAPO-PESO in Punta Arenas, Chile. The combination of lidar (left) and radar (right) over 36 months was the longest measurement of this kind to date for the investigation of clouds south of the tropics. Photo: Patric Seifert, TROPOS 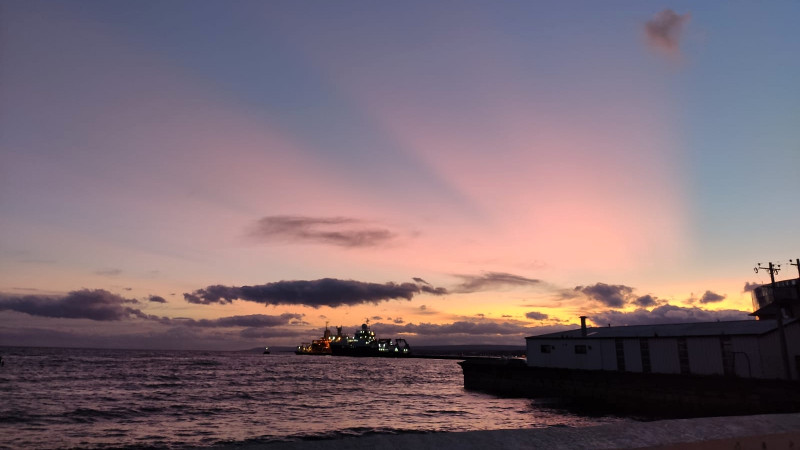 The smoke from the Australian wildfires in the atmosphere over Punta Arenas in January 2020. A high aerosol load was recorded over Punta Arenas for several days. The sky remained purple-orange during dawn and dusk, produced by the illuminated stratospheric plumes. Photo: Cristofer Jimenez, TROPOS

January 2020: Dense plumes of smoke from the Australian forest fires drifted through the otherwise very clean atmosphere over Punta Arenas. Seen here in the lidar measurements as a green-yellow layer at an altitude of 20 to 25km.
Graphic: Cristofer Jimenez, TROPOS 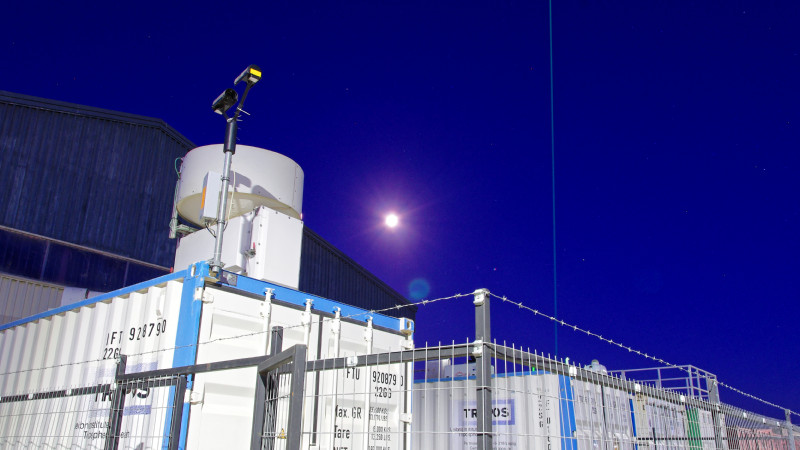 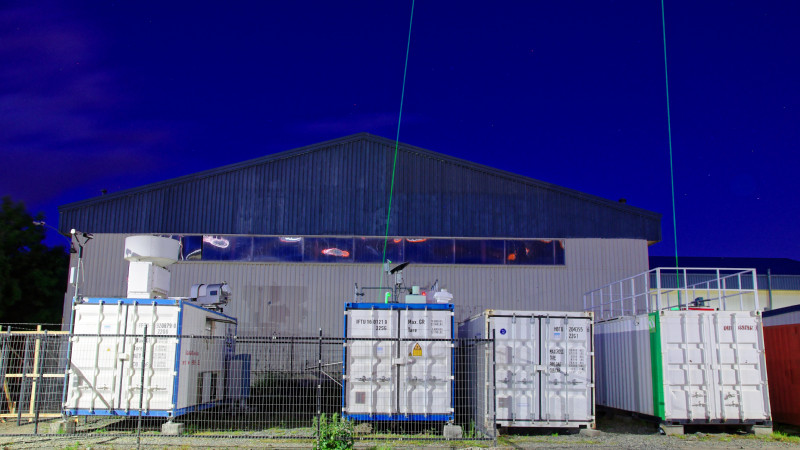 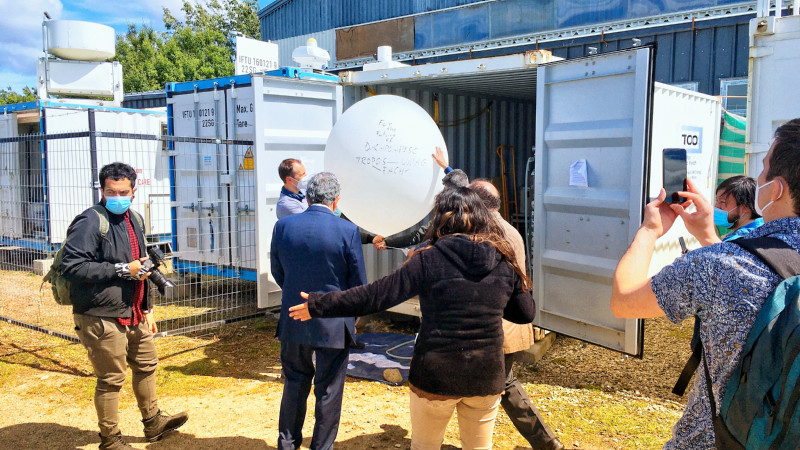 Last weather balloon on 8.12.2021. The Rector of UMAG, Juan Oyarzo Pérez, and the Vice-Rector for Postgraduate Studies, Andrés Mansilla Muñoz, launched the very last radiosonde of the campaign together with Patric Seifert, Boris Borja and Raul Pérez. On 30.11.2021, the measurements of DACAPO-PESO had officially ended.
Photo: UMAG Media 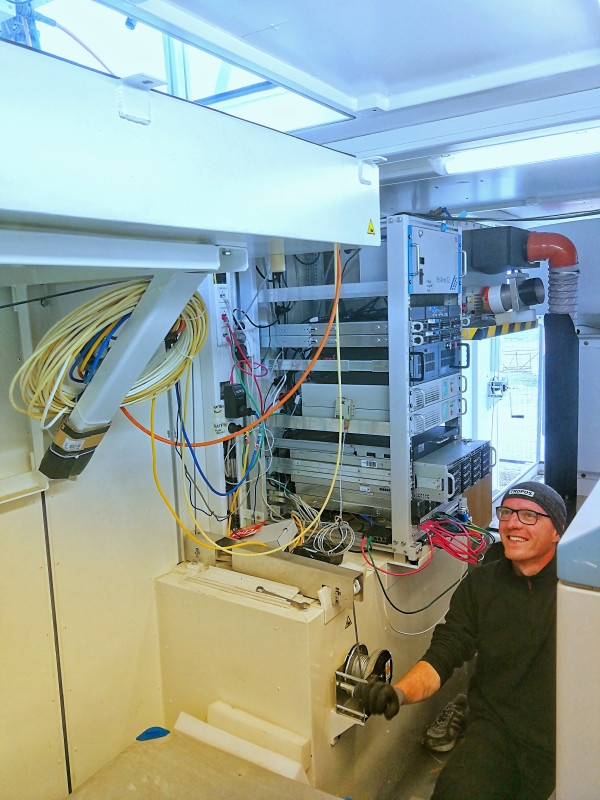 Martin Radenz from TROPOS brings in equipment and prepares the measuring container for the return journey.
Photo: Patric Seifert, TROPOS 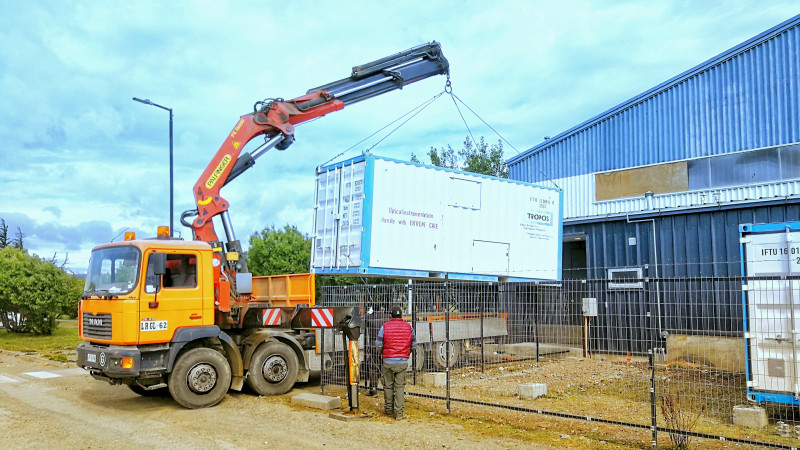 Removal of the TROPOS measurement containers. They are transported by lorry from the university campus to the port and then by container ship to Europe.
Photo: Patric Seifert, TROPOS