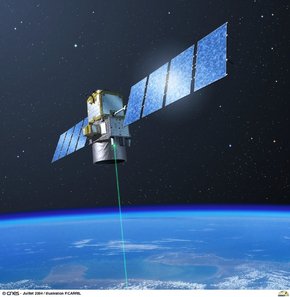 The spaceborne lidar CALIOP (Cloud-Aerosol Lidar with Orthogonal Polarization) onboard the polar-orbiting satellite CALIPSO (Cloud-Aerosol Lidar Infrared Pathfinder Satellite Observations) [Winker et al., 2007] provides vertically resolved information on aerosol and cloud parameters on a global scale since June 2006 and measurements are still ongoing. CALIOP is a backscatter lidar operating at 532 and 1064 nm. For the data analysis of measurements of this simple backscatter lidar general assumptions on a fixed lidar ratio (extinction-to-backscatter ratio) are required in order to obtain the particle extinction coefficient or the AOT (Aerosol Optical Thickness). From advanced ground-based lidar measurements optical parameters (like the lidar ratio) characteristic for different aerosol types can be derived without assumptions of predefined lidar ratios.

The results of ground-based lidar measurements are used to validate space-based lidar observations and to verify the satellite-based aerosol typing in detail. This work shall also support the harmonization of continuous global observations from space with different sensors over the next decade.

Measurements of the following projects/campaigns are used for the validation of satellite-borne lidar data:

In principle we can say CALIPSO does a good job and the discrimination schemes used in the automatic data analysis perform well. Some critical points are summarized in the following:

From the EARLINET–CALIPSO comparison studies we found that cloud-aerosol discrimination is a very critical issue. Problems occur in particular for thick dust layers and thin ice clouds (with optical thicknesses of the order of 1–2), because these targets exhibit very similar optical properties which leads to misclassification.

Another critical point is the occurrence of mixtures of pure aerosol types which plays an important role but is not sufficient considered in the CALIPSO algorithms.

We also found that multiple scattering is an issue, not only for clouds but also for aerosol, in particular mineral dust. Multiple-scattering effects are controlled by the particle size. Wandinger et al. (2010) show that CALIOP underestimates extinction coefficients up to about 30% in the case of Saharan dust plumes over the North Atlantic due to ignoring the significant multiple-scattering effects caused by forward scattering of large dust particles. An example of a measurement taken at Granada on 5 July 2008 is presented in Fig. 3. Dust was observed in different layers up to about 6 km height. The lidar ratio measured from ground is larger than the CALIPSO a priori value, especially in the layer between 4.2 and 5.2 km height that could be traced back to the Western Sahara. The difference of the extinction coefficients in this layer is 20% larger than the difference of the backscatter coefficients. 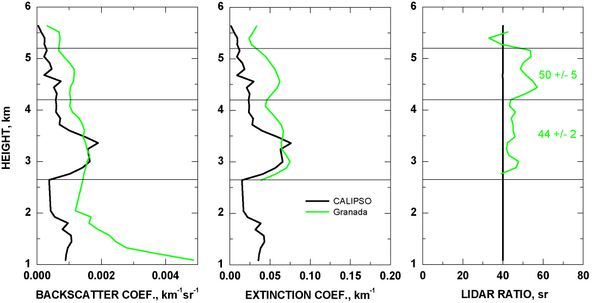 Fig. 3: Backscatter coefficient, extinction coefficient, and lidar ratio at 532 nm measured
at Granada on 5 July 2008, 02:17–02:47 UTC, and taken from CALIPSO Version 2
data for the overpass at 02:27 UTC. Two dust layers are indicated by horizontal lines.

Although such kinds of satellite measurements improve the knowledge on aerosol optical properties on a global scale there are still lacks of knowledge due to the performance characteristics of the satellite: The satellite revolves around the earth with a speed of 7 km s-1 and performs measurements with a spatial resolution of 5 km [Kacenelenbogen et al., 2011]. The same footprint is observed every 16th day which inhibits the observation of short-term developments and atmospheric processes such as cloud evolution or the diurnal cycle of the boundary-layer development.

Advanced ground-based lidar measurements are used to validate results from CALIOP onboard CALIPSO. It is the first lidar in space but there will be more.

The ADM–Aeolus (Atmospheric Dynamics Mission–Aeolus of the European Space Agency ESA) and EarthCARE (Earth Clouds, Aerosols and Radiation Explorer of ESA and the Japan Aerospace Exploration Agency JAXA) missions will continue and extend spaceborne lidar observations in subsequent years. For this missions 355-nm high-spectral-resolution lidars (HSRL) will be applied being different from CALIPSO with its simple backscatter lidar operating at 532 and 1064 nm.

For the harmonization of global observations from space with different sensors over the next decade so called wavelength conversion factors also gained from advanced ground-based lidar measurements at multiple wavelengths can be used.