Lidar stands for "light detection and ranging" and is a radar-related ("radiowave detection and ranging") method to remotely measure atmospheric parameters. Lidar systems send out laser pulses and detect the backscattered radiation. From the signals' time delay and the speed of light, the distance from the backscatter location can be determined. Clouds and dust particles in air (so-called aerosols) scatter laser radiation very strongly. Therefore, a simple application of lidar is the highly resolved detection and distance determination of clouds and aerosol layers. Depending on the wavelength of the laser light used, lidar systems are more or less sensible to molecular or particle backscattering. Backscattering from molecules is called Rayleigh scattering and shows a 1/λ4 proportionality. The magnitude of particle backscattering at a certain wavelength depends on particle size, refractive index and concentration of the scatterers. With lidar systems that emit multiple wavelengths, the size distribution of atmospheric particles can be determined (inversion). 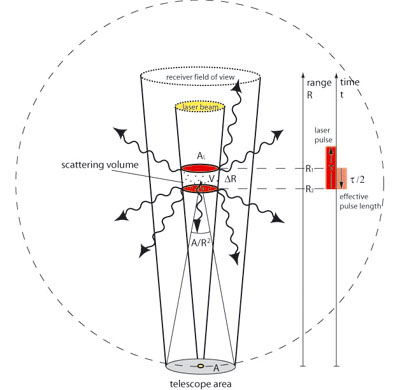 A pulsed laser beam is sent into the atmosphere, hits air molecules and other particles, and is scattered by them. The scattered light is sent into various directions and only a small part is reflected back towards its origin. The backscattered light is then collected by telescopes and conducted into a detection unit. There, after passing through filters, the signal is received by a detector (a photo multiplier tube or a photo diode), converted into electronic signals, and recorded with temporal resolution. From the time delay, the distance R of the scattering volume can be determined and is expressed as

with cLuft,the speed of light in air, and the time t between emission of the laser pulse and reception of the backscattered radiation. The maximum range resolution ΔR depends on the lenght of the laser pulse τL, the time constant of the detecting electronics τN, and the reaction time of the interaction of laser light with particles τW :

The time of interaction τW is negligible. With a typical laser pulse length of a Q-switched Nd:YAG laser τL = 10 ns and a time constant of the detection electronics τN of 50 to 200 ns, a range resolution ΔR of 7.5 to 30 m is achieved.

The power P(R,λ) of the backscattered light is given by the so-called lidar equation:

The received power P(R,λ) depends on 4 terms which are listed and explained in the following table.

Given that P0 is the average power of a single laser pulse and τ the temporal pulse length, the pulse energy is derived by E0 = P0τ. ΔR = (cτ)/2 is the effective pulse length. A is the area of the primary reception optics and η the overall system efficiency (optical transmission from emitter to receiver and detection efficiency).

The geometry factor contains the overlap function of the laser beam with the receiver field of view, called O(R), and a R-2 dependence. The latter is obtained from the fact, that the area of reception is part of a sphere's surface with radius R, centered in the scattering volume.

The backscatter coefficient is an atmospheric parameter which determines the strength of the lidar signal. It describes how much light is scattered in the backward direction.

Given that Nj is the concentration of scattering particles of kind j and dσj,sca(π,λ)/dΩ is the differential backscatter cross section of the particles, the backscatter coefficient results in the sum of all kinds of scatterers:

In the atmosphere, the laser light is scattered by air molecules and particles. The backscatter coefficient β(R,λ) can therefore be written as a sum:

This term is derived from the specific form of the Lambert-Beer-Bouguer law for lidar. The integral describes the way from the lidar to the location of backscattering at R. The factor 2 represents the forward and backward travel of the light. The extinction coefficient α(R,λ) is computed similarly to the backscatter coefficient as a product of concentration and extinction cross section σj, ext for every type of scatterer:

The extinction results from absorption (index "abs") and scattering (Index "sca") of light by molecules and particles:

As already mentioned, β and α depend on the wavelength of the laser light. This relation is determined by the size, refraction index, and shape of the scattering particles.

In summary, the lidar equation can be written as: